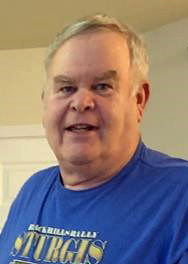 Posted at 19:27h in Uncategorized by staff 0 Comments
Share:

Westlie Arthur Carlson passed away suddenly December 17 at St. Alexius hospital in Bismarck, ND.  Wes has been reunited with his bride, Martha, who passed away on March 12 this year. They will be buried together at North Dakota Veterans Cemetery in Mandan, ND.  Funeral services will be on Monday, December 28, 2020, at 11:00 a.m. at the Bismarck Funeral Home.  Visitation will be one hour prior to the start of the service.  For those who cannot attend, the service will be streamed live on the Bismarck Funeral Home Facebook page.

Wes was born November 9, 1950 in Minot, ND. Minot would be his home almost all his life. He was the son of Arthur and Doris (Brown) Carlson, and spent his childhood cooking up mischief for his younger sisters. Westlie graduated from Minot high school in 1968 and became a skilled driver for his father’s sanitation business. Wes eventually took over Carlson Sanitation, and provided reliable service for decades. When mobility became a challenge, Wes sold the sanitation business and then drove school bus. “Mister Wes” loved the kids on his bus, and loved harassing them even more, frequently announcing, “I forgot where you live!”

Wes married Martha Hansen on April 23, 1971. It was a bonus that she was a blonde and was feisty enough to keep up with Wes’s antics. Wes and Martha raised three children. Sometimes the family would join Art and Doris for the weekend at Rice Lake, with boat rides and Martha on waterskies. Wes always had a special love for animals and treasured the family’s dogs and cats. Later Wes and Martha were blessed with eleven grandchildren, which meant more kids to joke with.

Westlie had been living at Missouri Slope nursing home in Bismarck for a month and said you’d have to search miles and miles to find better staff. He also appreciated the help at Benedictine Living Center of Garrison and The Wellington in Minot; all three were homes in the last year. Westlie was always a joker and kept his good humor to the end.