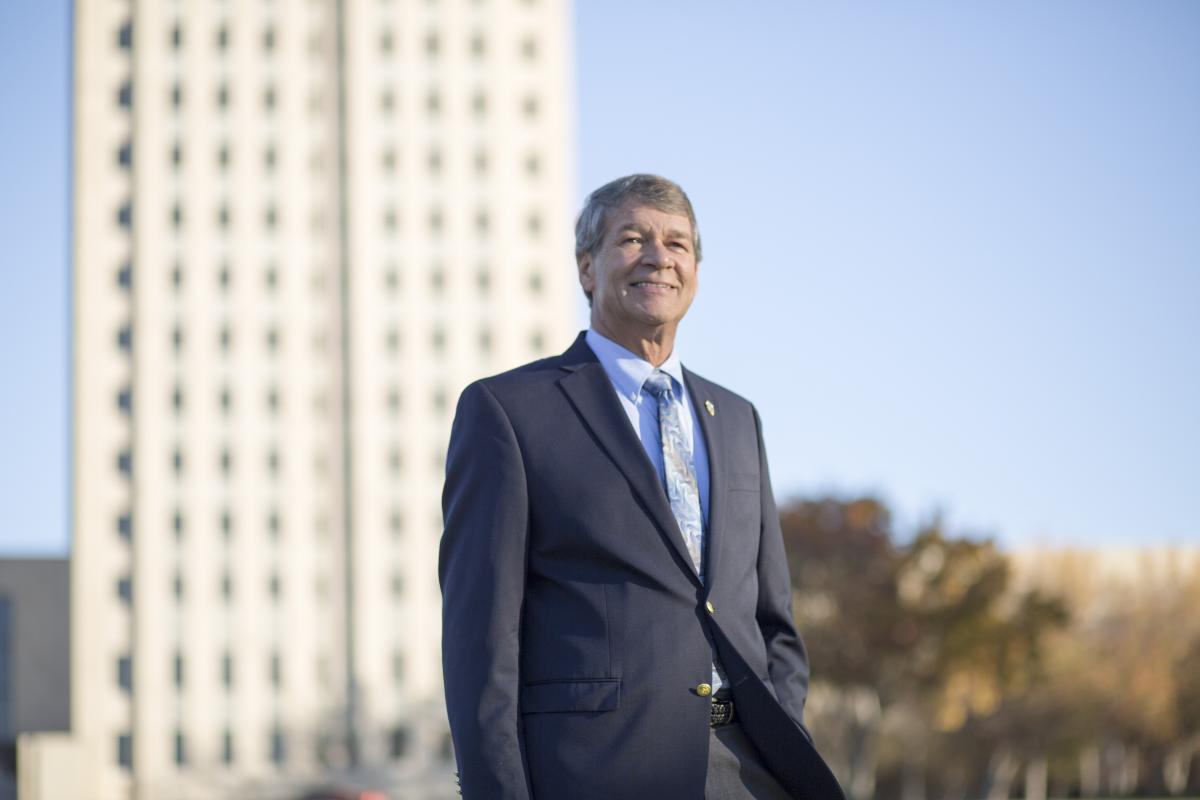 Posted at 22:11h in Uncategorized by staff 33 Comments
Share: 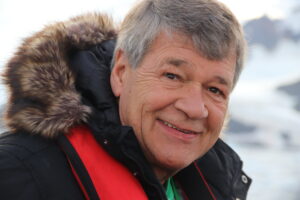 A funeral service will be held at 11:00 AM on Thursday, February 3, 2022, at the Bismarck Exhibition Hall, with Rev. Laurie Natwick officiating.  A live broadcast will be held on all statewide NBC stations as well as live streamed on KFYR Facebook page.  Following the service, cremation will take place and a private family burial will be held at a later date.

Visitation will be held in the Memorial Hall of the North Dakota State Capitol on Wednesday, February 2, 2022, from 4:00 to 8:00 PM.  Public may enter through the south entrance of the Capitol.

Wayne was born on February 5, 1953, to Martin “Buck” and Margurite “Peg” (McMaster) Stenehjem in Mohall, North Dakota. He graduated from the University of North Dakota and received his law degree from the UND School of Law in 1977. He was married to Tamra Smith on June 16, 1978, and his son Andrew was born on December 31, 1980.  On June 30, 1995, he married Beth Bakke Stenehjem.

Wayne, a trivia expert, was a “Phone a Friend” for Who Wants to be a Millionaire and in true fashion he provided the correct answer. He loved playing Jeopardy and Words with Friends; he was highly competitive. An Eagle Scout since 1968, Wayne was honored with the Distinguished Eagle Scout Award in 2013. He had an “open door” office. Boy Scouts, FFA members, preschool classes, and many small groups were welcome. He especially enjoyed meeting children and had a gift for putting them at ease. Wayne was well-known for his sunset pictures of the Capitol. He was a gifted and humorous speaker.

Beth and Wayne hosted annual 4th of July parties where all were welcome. Friends, new and old, have memories of water balloon slingshots and the occasional mishap with shingles and fences, pinatas held up only as high as the child who was aiming, and Mentos in Diet Coke with volcanic results. Wayne masterminded the fun. Wayne’s laugh was like him – larger than life and completely genuine.

Wayne, Beth, and Andrew travelled the world over: Antarctica, Africa, and many places in between. On a recent trip to Belize, he became a certified diver, joining his son, Andrew, and nephew on some spectacular dives. Closer to home he and Beth explored the local area with their electric bikes.

He is proceeded in death by parents, Martin (Buck) and Peg Stenehjem; brothers, John and Robert (Bob); and sister, Sue Stenehjem-Brown.

Rest In Peace. Thank you for years of service.

Thank you Wayne for all the years of great service to our State. RIP. Many blessings to your family ﻿

I had the privilege and honor to work with Wayne on the Pardon Advisory Board for 7 years, and also worked with Wayne on hundreds of issues over the years in my own law practice. Wayne was a true professional and dedicated public servant. Wayne and Beth were always so down to earth and treated everyone with great respect both on a personal and professional level. He will be terribly missed. My wife, Deb, and I, extend are heartfelt condolences to Beth and family.

Wayne, you and I have been friends since we were teenagers. You were a good guy then and a good guy right to your passing from this world. We will miss you, from your rulings as attorney general to your great photos on Facebook to your infectious laugh. To Beth, Andrew and the rest of family, may God be with you at this time and all times. Soar with the angels, Wayne.

Wayne was an Amazing gentleman I’ve ever met! He will be greatly missed! Thank you for the years of service! May he RIP! ❤️🙏 my prayers and condolences to the Stenehjem family!

I have no words for your passing. I remember your smile first & foremost. Godspeed Wayne.
Deepest sympathies,
Susan Fleck Evans

My father, Ed Krieger, a WWII veteran so enjoyed meeting and hearing Wayne speak to the veterans on Memorial Day, 2017 in Glen Ullin. Their smiles say it all. May they continue on their friendship up above. Sending deepest sympathy on Wayne’s sudden passing.

Thank you Wayne for your years of dedicated service to the North Dakota people.
Beth and Andrew, please know that our prayers are with you.

An incredible man who spread happiness everywhere he went. I’m a better person for having known him. He will be missed. My heart goes out to Beth, Andrew, and all who loved him.

Oh Beth I cant believe this could happen to the sweetest gal on the planet. I am deeply sorry and shocked. After NDSU about a year I walked in the back door of the sports bar and saw a pretty blonde and a tall dark handsome stranger the gal was waving but I didnt know why as I got closer I could see it was you what a surprise. You were in Bismarck working for the legislature and when I was leaving you said to me “have a nice life” what a classy genuine lady. Prayers and love to you and your family.

Thank you for your many years of service to our State. I had the pleasure of knowing you through your Law Firm in Grand Forks. RIP and Prayers to Beth and Andrew.

A very decent man and a fine AG. My condolences for his family at his passing so soon. “Blessed are those who mourn, for they shall be comforted.”

I was serving as the SD Attorney General, when Wayne became the ND Attorney General. Wayne and Beth were two of the friendliest, most genuine people I met at the national meetings. His long years of dedication to public service are admirable. We should not forget all the sacrifices Beth made, to share this fine man with citizens all over the state. He was the real deal. Bless you Beth and son Andew.

Wayne, you will be missed by so many. Hard to believe you are not going to be here. Will miss yiu

You will be missed by so many. Hard to believe you are not going to be here anymore. I will miss seeing all your beautiful sunsets and sunrises of the Capitol that you would post or your lefse making at the holidays. Rest in peace good friend. I’m sure George is welcoming you with open arms.

so sorry about wayne rest in peace.

On behalf of our entire family, we share our deepest condolences. My mother, Lois Ivers Altenburg, fondly remembers Wayne as a welcoming and outgoing friend. She spoke of the many years of productive collaboration at multiple state Republican party conventions; always greeting her with his broad smile and a warm and friendly embrace. His hard work and dedication to the state of North Dakota will be greatly missed.

I never got to know this man or meet him but at a time in my daughters life he was there to help and guide her. And her knowing that he cared , helped her make the best decisions she needed too, to grow up and find her way. Bless you! All my prayers to you and your family.

Such a loss, wonderful man, so many accomplishments, prayers to his family, rest in paradise.

Wayne will be dearly missed. I will never forget the stories my grandfather, Manley Hillesland, told about scouts. Wayne was a part of his troop. Wayne took the time 2 years ago when Manley passed away to write a handwritten note and share a beautiful memory about a 50 mile hike. I was deeply touched. I also had the privilege to work for the Attorney General’s office many years ago. May you find peace in your many beautiful memories.

My son, Aaron Webb, worked with Wayne for a few years and always had great respect for him, as did I! I ran into Wayne at two occasions after that and each time he knew me as Aaron’s Mom! Great memory indeed. My sincere condolences to his whole family. He will be greatly missed. May God Richly Bless You ALL! May he Rest in Peace!

Thank you for your years of service. Our Condolences to t

Condolences to the family.

I served in the House of Representatives in 1981-2 representing District 42 (at the time) in Grand Forks, ND. Wayne was our Senator from that district. I followed him through the years as I moved elsewhere, but he was younger than me. His death hit me hard. I am sorry, Beth, you didn’t have enough time with him.

Thinking about you Andrew. I am so sorry for your loss. I am glad that you are able to be there for your mom and it is pretty cool seeing all the great memories being shared about your dad. Take care buddy.

My deepest condolences to Beth, Andrew and all of Wayne’s family. I first met Wayne as a participant in the 2nd Leadership Bismarck Mandan class. I became better acquainted with him as I continued to be involved in the program. He always kindly agreed to assist with Law Day as a speaker and as a resource for the most up-to-date and relevant topics. I developed a friendship with him in my work in Government Affairs with the ND Hospital Association, St. Alexius Medical Center and the ND Association of Realtors. He always greeted me warmly when we met and was always available to offer clarification on legislation that might impact his office, no matter how busy. At annual legislative get togethers, he always had at least one new joke to share. And when NDAR hosted their annual candidate interviews, despite his longevity in office, he always graciously answered all of our questions. I was so sad to hear of his passing. He was admired and respected by everyone who knew him and will be missed. Please accept my deepest sympathy. I will keep all of you in my thoughts and prayers.

My condolences to the family. Wayne was a gracious individual, I had meet him and his wife at the Republican convention in Grand Forks as a Delegate, I was truly honored. The privilege to have worked and visited with Wayne was special. Thank you for your great service to North Dakota. Rest in peace.You will be greatly missed.

My deepest sympathy to you both on Wayne’s sudden passing.

I was able to view the service this morning and thought it was very moving! You did a wonderful 👍 job on your eulogy.

May fond memories of Wayne keep him close in your heart 💕 and bring you both peace ✌️ and comfort in the days & weeks ahead.

In case you don’t remember me, we were long-time co-workers @ West Central Human Service Center.

Sending prayers for peace and gentle comfort to the family.

Rest in Peace Wayne. You were truly a Champion of all of us North Dakotans. ‘The Law is the Law! ; and that is exactly why you were our AG for so long.
Our brief chats outside the Ralph (until they shut is in) were really memorable; 20-30 below couldn’t keep us die-hards from a couple drags twice a game, but …..
God Bless You forever … and my deepest sympathy to your family.

I would just like to say that Wayne was in my pardon hearing recently and he was a big part of helping me change my life around for the better I will always be grateful for him and man he was.