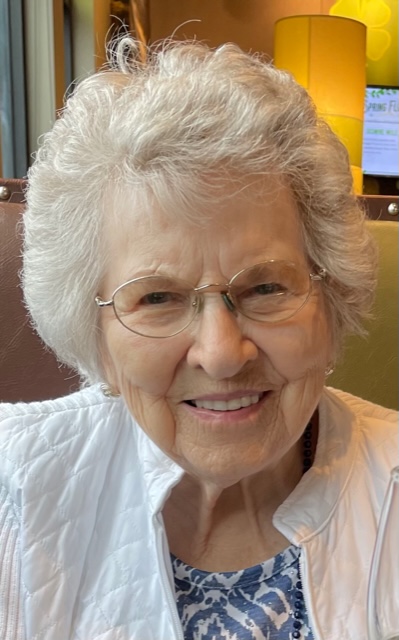 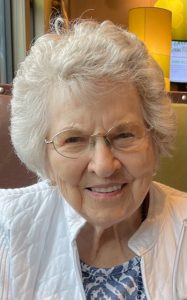 Gin was born on February 8, 1927, to Danish immigrant parents, August and Betty Nielsen, on their farmstead near New England, ND. She was educated in New England and graduated from high school there. She received a scholastic scholarship from Concordia College in Moorhead, MN, where she studied home economics and math

Gin was very proud of her Danish heritage and when invited by her uncle to live and work in Denmark she decided to spend some time there with relatives. Her last trip to Denmark was to celebrate her 70th birthday with her cousins.

Her next adventure was being stationed as a stewardess in New York City, where as a result of her language skills, she flew international flights for TWA.

Gin was a talented homemaker, seamstress, hostess and cook. Her Sunday dinners always included fresh baked bread and pies. She enjoyed setting beautiful tables and having “coffee parties”, a practice she continued into her 90’s.

She was a member of Good Shepherd Lutheran Church where she served in a circle and attended Bible studies.

She was preceded in death by her husband Bob Henne, her parents August and Betty Nielsen, one brother, Ernest Nielsen, and two sisters, Sonja Wuttke and Donna Mae Hewson.

Our family would like to thank the staff at Edgewood Vista and Missouri Slop that cared for mom these last eight years. A special thank you to CaringEdge Hospice for their compassionate care and concern over the last year.

Interment will be at Sunset Memorial Gardens, Bismarck, will follow the service.

In lieu of flowers the family suggests memorials be made to Good Shepherd Lutheran Church.

My sincere sympathy to your family. I remember your mother as a sweet and kind lady! She even tried to teach me how to play bridge!