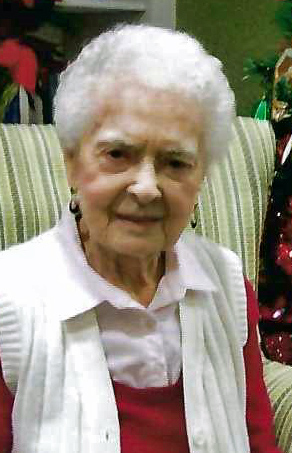 Posted at 19:34h in Uncategorized by staff 2 Comments
Share:

Veronica (Verne) Goeppinger was born May 12, 1920, in Flasher, ND to Mike and Rosa (Schmidt) Gustin.  Verne started her working career at a young age, becoming a Nanny to various Aunts and Uncles while she attended school in Flasher.  After completing 8th Grade and a few more nanny jobs, Verne moved to Bismarck and tried her hand at being a waitress.  She was working as a waitress at the Grand Pacific Hotel when Pearl Harbor was bombed Dec of 1941 and she was recruited to work for Boeing Aircraft.  Verne worked for Boeing from 1942-1943 starting out as a ‘Rosy the Riveter’ working her way up the chain into various other jobs, including an Admin. Assistant.

In 1946, Verne took a different turn in her career and became a Telephone Operator for Bell Telephone working in CA. An Operator at that time was still a fairly new concept, but Verne again worked her way up the chain and achieved the status of Manager/Supervisor over the course of the 30 years she worked for Bell.  She retired from Bell Telephone in February 1975.  Throughout her working career, Vernes’ objective was always to learn as much as she could and strive to be the best she could as she moved through the ranks of her jobs.

While working for Bell, she met and married William (Bill) Goeppinger in 1963.  After Verne retired in 1975, she and Bill tended to their vegetable garden, fruit trees, and beautiful roses in their yard.  Verne was known to always have fresh produce and preserves with them when they came back to ND to visit family.  Verne and Bill enjoyed traveling throughout the US, parts of Canada, and even went to Europe.  They moved back to ND from CA in October 2003.  Bill passed away January 2005.

She was preceded in death by her husband, Bill, her parents, her mother and father in-law; 5 brothers and 2 sisters-in-law; 6 sisters and 8 brothers-in-law.

In lieu of flowers or gifts, please make a donation to a charity of your choice.

I took care of Vern at the nursing home for last 2 years and we share a close birthday. She Will Always be my favorite. In the final days of her passing when I was at work, I grabbed her hand and prayed and she remembered me and said “oh my Sadie girl” I will remember that forever. Such wonderful and sweet lady!