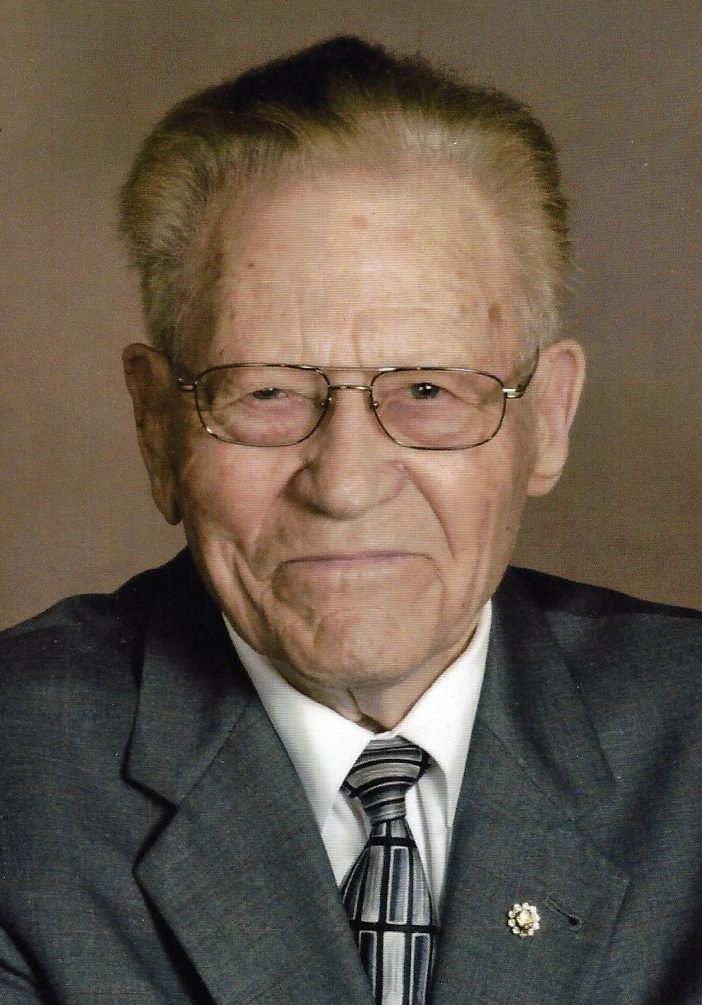 Posted at 19:24h in Uncategorized by staff 0 Comments
Share: 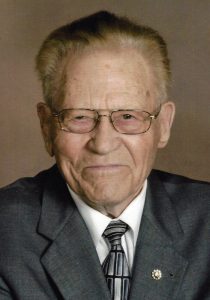 Vernon K. Lykken went home to his heavenly father on All Saints Day, Sunday, November 1, 2020, at the age of 96.  He bravely battled COVID-19 and spent his final days under the caring staff of the COVID unit at Sanford Hospital in Bismarck.  Visitation will be held on Wednesday, November 4, 2020, from 5:00 – 7:00 p.m. at Bismarck Funeral Home.  Funeral Services will be held on Thursday, November 5, 2002, at 11:00 a.m. at House of Prayer, Bismarck.  Following the service, burial will be at 1:00 p.m. at the ND Veterans Cemetery, Mandan.  For those who cannot attend, the funeral will be streamed live on the Bismarck Funeral Home Facebook page.

Vernon Kenneth Lykken was born in Grafton, ND, on Christmas Day, December 25, 1923, to Oscar and Mabel Lykken.  He grew up with two brothers and four sisters on a farm near Grafton.  After graduating from Grafton High School in 1942, he attended NDAC (ND State) in Fargo where he was a member of Alpha Gamma Rho; he also attended Aaker’s Business College in Grand Forks.

Vernon joined the Army Air Corps in October 1943 and was assigned to the 95th Bomb Group at the 8th Air Corps based at Horham, England.  He served as a waist and ball turret gunner on a B-17 Flying Fortress.  He flew 17 combat missions over Germany during World War II and also flew several mercy food missions to the starving Dutch.  Before heading home, he painted the Flying Fortress wheels with white sidewalls saying, “She can’t leave without looking good.”  Their bomber was the only B-17 in WWII with white side walls!  He received the Air Medal with Three Oak Leaf Clusters; The American Theater Service Medal; The European-African-Middle Eastern Service Medal with Two Bronze Stars and the Good Conduct Medal.  He was honorably discharged in September 1945.  His original war time diary can be viewed by the public at the North Dakota Heritage Center in Bismarck.

After returning home from the war, Vern helped on the farm and hauled beets for Ole Flatt.  Somewhere between the fields and rows, his sister, Dorothy set him up with a date with her friend Carol.  It was love and first sight and he married Carol Y. Hultner, East Grand Forks, Minn., on February 21, 1948.

It was the beginning of an adventurous journey together.  Life was always an adventure when you were with Vern.  They set out to do potato vine cutting, hauling the machine around the country along with a small trailer home to live in.  Somewhere in the night between Kansas and Nebraska they pulled into what looked like nice clean grounds.  The next morning, they realized that they had parked on the grounds of a State insane asylum.  Their vine cutting days were cut short after that incident. When the potato vine cutting season was over, they returned to live in East Grand Forks, MN.

If one door was shut, Vern did not give up, he just looked for another way.  Since he was a Christmas baby, why not try selling Christmas Trees.  So began another adventure with Vern, Carol and Big Bertha, their monster truck.  They would travel up to Canada, buy a huge load of Christmas Trees and set up Christmas Tree lots in Devils Lake, Minot, and surrounding areas.  He would collect a certain percentage of what was sold from each lot, trusting the people were truthful in saying how much was sold while he was gone.  An honest handshake was all that was necessary back then to prove you were of good character.

His good name got around and soon a man from Myhra Equipment Company looked him up.  He asked if he would be interested in working with their company.  To another new adventure, he happily agreed.  While working as a tool pusher, he noticed one of their salesmen didn’t seem to be doing much selling.  He asked his boss if he could give it a try to help move their inventory.  He was given the chance and his equipment selling career took off like a bullet.  Throughout his employment, he outsold every salesman there.

Word got around and an opportunity to sell Heavy Equipment for General Diesel was presented.  Yes, another adventure would take him not only to selling heavy equipment throughout the state of ND, but to winning several trips, awards and becoming a vice president and stockholder for the company. He was known as “The Green Hornet” because he sold so many Terex Green pieces of equipment throughout the state. The company later on was sold out to another entity which he took as an opportunity for another adventure.

At age 60, Vern moved down the highway from General Diesel, rented a lot and started up his own business as a heavy equipment broker and called it “Vern Lykken Company.”  His wife, Carol was an integral part in his business.  She was a real asset, his Girl Friday, his right hand, always there. She was dedicated, had meticulous attention to detail in all the administrative tasks, and her presence contributed to a successful heavy equipment business.  Sadly, she passed away in March of 2012.  They were truly blessed to have a happy long adventurous marriage of 64 years, attending events and being able to travel to many parts of the world.

Vern continued his heavy equipment passion and sold equipment all over the world including Canada, Honduras, Mexico, England, and South Korea. Vern’s selling career spanned over 70 plus years.

Vern and Carol raised four children in Minot.  One son, Terry served in the U.S. Army in the Artillery during the Vietnam War with 13 months of combat near Da Nang.   Second son, Randy retired as a building contractor. Third son, Bradley, served three years in the Vietnam Era Navy and retired from US Bank.  Youngest daughter, Pamela retired from the National Guard in Bismarck.  There is not enough space to share the many stories of the wonderful adventures from annual family traveling trips, fishing trips, hunting trips, camping trips, family reunions and playing hours upon hours of cribbage.

Vern was involved in the Elks, VFW, American Legion, Amvets, and along with his wife Carol, were members of The House of Prayer and actively donated to several charities throughout their lives.

Words to describe Vern were Faithful, Patriarch, Leader, Free Spirit, Honest, Great Character and Spotless Reputation.  When people met him, they saw a person full of love and generosity, courage, ambition, straight shooter, fun loving, true gentleman dressed to the nines, mixed in with joy and humor.  His presence filled any room he entered, and he impacted every person he spoke with.  His service to his country and community was admired by all who knew him.  He was given a long, faithful, and productive life and marriage to a loving mate.

Can’t keep a good man down.  Now on to his next adventure!