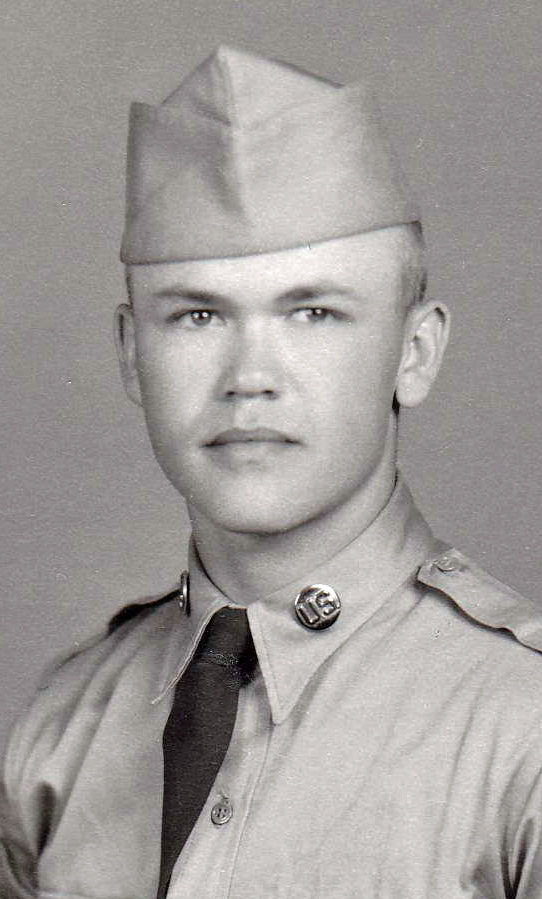 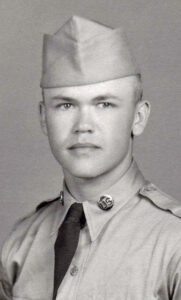 Ronald Olmsted, 87, passed away on January 12, 2023.  Memorial services will be held Friday Jan. 20 at 10:30 a.m. at the Bismarck Funeral Home.  The service will be livestreamed on the Bismarck Funeral Home website under Ronald’s obituary.  Internment will take place at 1 p.m. at the North Dakota Veterans Cemetery, Mandan. In lieu of flowers, please make a donation to the North Dakota Veterans Home Foundation, contacting them at 701-683-6500 or via email at ndvh@nd.gov.

Ronald Duane (Welder) Olmsted was born on March 31, 1935, to George and Katherine (Kary) Welder at the family home on Sweet Avenue in Bismarck. When he was 2 years old, his father died unexpectedly.

Young Ronnie and his mother moved back to the home of her parents George and Elizabeth Kary in Mandan for five years with Katherine’s younger siblings who were like his brothers and sisters. Some of those aunts and uncles were younger than him.

On September 7, 1940, Katherine married Charles E. Olmsted who raised Ron as his own going so far as to adopt him. After that, Ron lived most of his life in Bismarck where he enjoyed hunting, fishing, baseball and softball.

Among his childhood highlights was getting to meet his sports idol New York Yankee great Babe Ruth in 1947. A 12-year-old Ron was among a group of about 50 Bismarck-area kids and adults who greeted the retired Sultan of Swat when his plane had a brief stopover at the Bismarck Airport. Ron proudly received the Babe’s autograph.

Although he was small for his age, Ron would not let that stop him from excelling in sports. For example, he struck out many Junior Legion baseball opponents when he stood on the mound. His skills at the bat kept Bismarck on the scoreboard as well. His mother Katherine often said, “Ronnie was a stick!” in reference to his hitting skills.

When Ron was 16, Bismarck was favored to win the 1951 North Dakota state Junior Legion baseball tournament. That event allowed him to compete against two future professional athletes. One was Wahpeton’s “huge-man-among-boys” pitcher Steve Myhra who later played NFL football with the Baltimore Colts. The other was some guy called Roger Maris from Fargo Shanley who, of course, later achieved stardom with the New York Yankees. Bismarck took second place when most of the team could not hit Myhra’s pitches in the championship game. Though they lost, Ron went 3 for 4 against Myhra in that final contest. Ron recalled that Myhra “dusted” him in his last at-bat.

Later when he played amateur baseball, Ron participated in an exhibition game against a team featuring Satchel Paige, one of the greatest pitchers of all time. Ron did not fare well against Page, who still had plenty of juice in his arm even though he was close to 50 years old.

Ron also was proud of his fastpitch softball playing days, which included a stint with the renowned Roosevelt Bar team of Bismarck.

Upon his return stateside, Ron worked at Sioux Sporting Goods and later Sherwin-Williams in Bismarck. In 1961, he married Darlene Roll at St. Vincent’s Catholic Church in Mott, North Dakota. That union gave the world his three sons: Mark, Monte, and Kent.

In 1970, Ron returned to college at Dickinson State University, where he earned his bachelor’s degree in education. While studying there in his mid-30s, he made two interesting choices. Ron initially stayed in the dorm (bad idea), and he played baseball with a bunch of 20-year-olds as teammates (good idea). While serving as catcher for the baseball team, Ron earned the nickname “Grandpa” from his teammates.

Upon graduating from college, Ron returned to Bismarck and served as a substitute teacher. He also worked at Vantine’s Paint and Glass. Ron soon joined the North Dakota Highway Department, where he worked for many years first in personnel and later as a civil rights officer. Ron also was a longtime member of the Bismarck-Mandan Elks Club.

He spent most of his retirement in Bismarck until moving to the North Dakota Veterans Home in Lisbon in 2014 where he spent the remainder of his life. He died there on Jan. 12. Ron was preceded in death by his parents George Welder, Katherine Olmsted and Charles Olmsted.

Played fast pitch softball with Ron and enjoyed fishing trips with many friends. R.I.P my friend.