Posted at 14:31h in Uncategorized by staff 0 Comments
Share: 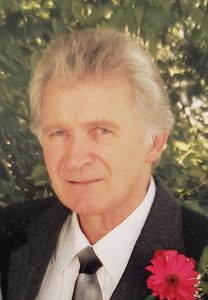 Richard L. Weflen, 74, Bismarck, passed away peacefully November 17, 2019 at Missouri Slope Lutheran Care Center, Bismarck.  He fought a long battle with Parkinson’s Disease and dementia.  A funeral service will be held at 12:00 p.m. Monday, November 25th, at Capital Christian Center, 3838 Jericho Rd., Bismarck, with Pastor Dan Kent officiating.  Visitation will be one hour prior to the service.  Burial will be held at the North Dakota Veterans Cemetery, Mandan, ND.

Richard was born on March 26, 1945 to Roy and Kathleen (Vonous) Weflen in Thief River Falls, MN.  They later moved to Tioga, ND, his dad’s hometown.  He attended Tioga schools and graduated from Tioga High in May 1964.

Richard was honorably discharged from the U.S. Navy in 1971 after serving four years during the Vietnam War.  He served on ships USS Kearsarge and USS Hancock.  He was spot-dolly for parking jets F-8’s and A-4’s and loading them with 500 lb. bombs.

On June 1, 1973 he married his loving wife, Elaine Nelson, at Trinity Lutheran south of Tioga.  They made their first home in Williston and later moved to Minot, ND where their daughter Sandi was born.  They later moved back to Williston, where their sons, Ryan and Jesse, were born and where the children attended school.  Richard worked in the oil field until 1997, when they moved to Bismarck, where he was employed by Roughrider Industries.

Richard enjoyed car shows and just driving through car lots when he could go for a ride.  While growing up, he enjoyed riding horses.  He told many stories of his horse Billy.

He is preceded in death by his daughter Sandi, father Roy, in-laws Arthur and Mary Nelson, and brother-in-law Archie.