Posted at 13:47h in Uncategorized by kkbold 0 Comments
Share: 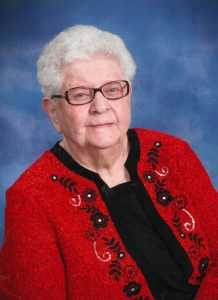 Monica (Zander) Yantzer, 96, Bismarck, passed away September 30, 2019.  A memorial service will be held at 10:00 a.m. Wednesday, October 2nd at the Church of Corpus Christi, Bismarck.  The family will receive friends Tuesday, October 1st, 5-7 p.m. at St. Gabriel’s Community Chapel, with a rosary and vigil service starting at 7:00 p.m.

What an amazing woman and mother. Mom was born June 14, 1923 on a farm near Crown Butte, ND to Liberatus and Margarette (Steckler) Zander. She was the oldest of eight children.  In her childhood it was customary for the older children to help in the home and the fields making education secondary. Even though her education was slighted, she developed tremendous “street smarts”. In October of 1942, she married Tony Yantzer and made their home in Mandan. They proceeded to have five children and currently four survive her – Bob (Maureen Froelich), Phoenix, AZ; Janice, Sun City, AZ; Patricia (Chuck Moris), Burien, WA; Eddy (deceased in 1955); and Gary (Joyce Wetsch), Bismarck.

They lived in Mandan until 1951 when they moved to Rapid City, SD. They lived there for five years and moved back to Mandan, financially distraught, in 1955 after the death of son Eddy following a long illness from a brain tumor. In 1970, a house fire destroyed most of their furnishings, clothing and car. They decided to start over and moved to Phoenix, AZ. Upon the passing of husband Tony in 2011, she was moved to Seattle to live with daughter Pat. In 2013 she was moved into an Assisted Living facility in Bismarck.

Her long work career included time at Ohms Restaurant, Bill’s Super Value, manager of the Coop Lunch Counter, all located in Mandan, and the Scottsdale Memorial Hospital in Scottsdale, AZ.

Mom was a tremendous cook, a skill she learned from her mother, her mother-in-law Elizabeth Yantzer (George) and her own innate taste and feel for cooking. She enjoyed gardening, raising flowers and vegetables, reading and family functions. She was very proud of all of her seven grandchildren, 10 great-grandchildren and excited about her first great-great-grandchild due this December.

Alvina Wang
So very sorry. I had breakfast with Monica most days and we visited. She was such a wonderful lady. She had many beautiful memories of her life and family.