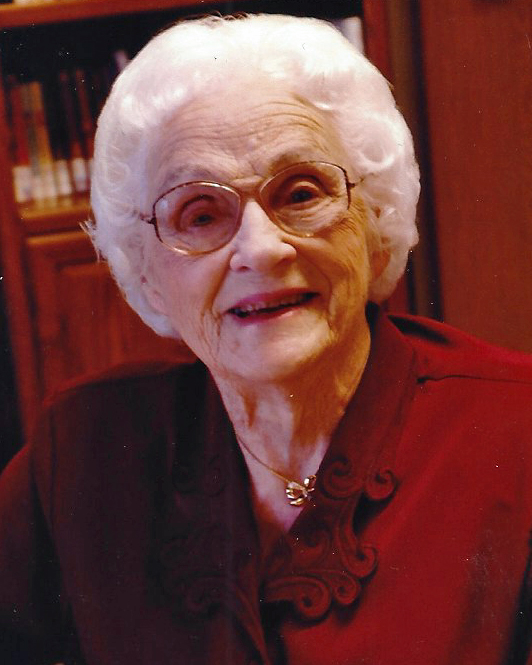 Joye Marie (Kensmoe) Buckmiller went to be with the Lord at age 103 on October 9, 2020, at Missouri Slope Care Center.

She was born on the family homestead during a snowstorm, along with her twin brother Roy, on January 21, 1917, in Prophets Township northwest of McClusky, ND.  She was the daughter of Ole and Carrie (Lasher) Kensmoe.

On September 28, 1940, she married William Buckmiller in McClusky.  Over the years they lived in Minnesota, Ohio, Texas, Washington and Wyoming.  In 1953 they moved to Riverdale, ND where Bill worked for the Corps of Engineers.  In 1977 they retired in Bismarck to be near family and friends.

Joye moved to an apartment at Valley View Heights in 2001 so she could visit Bill in Missouri Slope Care Center, where he passed away in 2004.  She continued living at Valley View until 2014 when she moved to Missouri Slope. She enjoyed family and friends visiting and sharing a cup of coffee.  She played SkipBo like a Grand Master and enjoyed going to Bingo.  She loved and appreciated all the health care workers over the years who were so kind to her.

She is survived by one son, Gary Buckmiller (Gretchen), Scottsdale, Arizona; and 3 daughters, Karen Crouch, Willa Rhoads (Gordon) and Cheryl Gallagher (John), all of Bismarck, as well as the grandchildren previously mentioned.  She was preceded in death by her parents, 4 brothers, Clifford, Leonard “Bud”, Roy, and Odell “Billy” and one grandson, Todd Rhoads.

Due to complications surrounding Covid 19, private family services have taken place and she was laid to rest at the McClusky Cemetery.