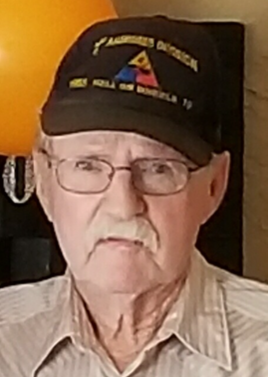 Posted at 18:02h in Uncategorized by staff 0 Comments
Share:

John “Jack” Putney, 82, passed away Friday evening, November 15, 2019, surrounded by his loving family. Burial will take place at the North Dakota Veterans Cemetery on Thursday, November 21, 2019, at 11:00 a.m. There will be a time of gathering at the Bismarck Funeral Home following the burial.

Jack was born to Charles and Mary Rose (McNellis) Putney, on March 18, 1937 in Hutchinson, MN. He grew up on the family farm along with his seven brothers and four sisters.
Jack joined the United States Army in February 1955. He served on the second Armored Division, “Hell on Wheels”, stationed in Germany. He was honorably discharged on December 31, 1957. Jack was extremely proud to be a veteran.
Jack married the love of his life, Rosalie “Rose” Treib on July 21, 1967 in Dickinson, ND. Together they raised Julie, Jackie, Charles and Roberta.
He was employed by Donal Corporation as a Power Lineman/Foreman for 25 years. He also was employed by American Contracting as a truck driver that hauled heavy equipment and at times hauled buffalo too, for 25 years. He retired in 2008.
Jack and Rose relocated to Bismarck in 2008 to be closer to their grown children and families. He was extremely proud of all of his family and had a very special spot in his heart for his great grandchildren Kasper and Morgan.
Jack is survived by his wife, Rose; children, Julie Schaff, Jackie (Troy) Johnson, Charles (Dawn) Putney and Roberta (Gregg) Moos; grandchildren, Jennifer (Austin), Sierra, Devin, Colby, Kaitlyn, Aidan, Brandon, Logan, Kaden and Kale; great grandchildren, Kasper and Morgan; brother, Donny (Darlene); sisters, Elaine and Faye; brothers-in-law, Steve (Julie), Paul (Nancy); sisters-in-law, Marilyn, Nora, Angie and Betty; and the rest of his family.
He was welcomed into heaven by all his family and friends who passed before him including, his parents; mother-in-law and father-in-law; son-in-law, Joe; brothers, Norm, Wally, Bob, Roger, Wayne, Russ; sisters, Dorothy and Lucy; brothers and sisters in-law, Margie, Marie, Juanita, Darlene, Sam S., Sam P., Richard, Jack, Joe, Mary, Danny; and other family members.