Posted at 18:53h in Uncategorized by staff 3 Comments
Share: 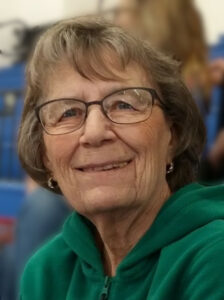 Mass of Christian Burial will be held 12:30 PM, Friday, April 1, at Cathedral of the Holy Spirit, Bismarck. Interment will follow at 3:00 PM at the North Dakota Veterans cemetery. View the livestream service here.

Joanne was born to Joseph W Maupin and Laura B Edmunds in Rushville, Nebraska on February 4, 1938. From Nebraska the family moved to Dickinson, ND. This is where she met and married her high school sweetheart, Jack Schwartz, in 1956. They soon had four sons and moved to various jobs to support the family. They first moved to Minneapolis, MN, then to Sunnyvale, CA. From California, they then moved back to ND, eventually settling in Bismarck in 1965.

Joanne’s days raising her sons consisted of school projects, sports (wrestling), Boy Scouts, and raising various animals and bugs. Joanne not only cared for her four boys, but also her brother, mother, and father, to the end of their lives. Joanne loved the time she spent raising her boys and was incredibly proud of the men they became. Soon she also had four daughters-in-law, 11 grandchildren, and 5 great grandchildren.

Joanne was an active and well-loved member in her community. She and Jack became members of Cathedral of the Holy Spirit in 1965. She worked in the parish office, school library, taught CCD, and served in the Alter Society. Once her children started school, she worked various jobs, including Woolworth’s. Joanne was a firm believer in the power of AA, having personally experienced the benefits of this program. She was also proud of her work with the Heartview Foundation. Joanne enjoyed handiwork – crocheting, cross stitching, and quilting. You have likely seen the work of her hands throughout her families’ homes. She also, of course, always took time to watch her Sunday Vikings football.

Of all the accomplishments and experiences in Joanne’s life, she found the most joy in the time spent with her grandchildren. She enjoyed her time with them at sporting events, vacations, weddings, birthday parties, sleepovers, ski trips, and super bowl parties. Her grandchildren will especially remember the summers spent at grandma and grandpa’s, making 25 cents an hour pulling weeds, playing card games and drinking root beer floats on the porch. Joanne was diagnosed with terminal cancer 10 years ago and a combination of her pure stubbornness and grueling chemo treatments allowed her to fight her cancer and to continue to be a part of their lives.

Joanne may be remembered most by being perfectly imperfect. She was never afraid to be herself and say how she felt. She lived a full 84 years that went by too fast. She died peacefully, without regrets, leaving her loved ones with many beautiful memories.

To Joanne’s boys and their families, I’m so sorry for your loss. I was one of the lucky ones that got to work with Joanne at Woolworths back in the day. Then when we started the monthly Woolie Girls get together it was so nice to visit with her. I too have received a quilted table top and crocheted winter hat, plus other items she made. She was a gem of a person, as was Jack! Rest In Peace, Joanne.

We were so sorry to read of Joanne’s passing. She was such a kind, caring person. It was an absolute privilege to have been her friend. Our sincere sympathy to her family.

I was so sorry to hear of the loss of your mother. She was always so happy and kind. Eternal rest grant unto her, O Lord, and let perpetual light shine upon her. May she Rest In Peace.