Posted at 14:47h in Uncategorized by staff 2 Comments
Share: 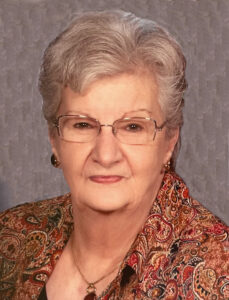 Janyce Holznagel, 93, of Bismarck, passed away Monday, December 19th at CHI St. Alexius Hospital in Bismarck, North Dakota. A Celebration of Life will be held at 1:00 p.m. on December 27th, at Bismarck Funeral Home. Burial will follow the service at Sunset Memorial Gardens.

Janyce was born in Washburn, ND to Russel and Ferol Anderson on September 8th, 1929. She was raised and educated in Washburn, graduating high school in 1947.

In 1951, Janyce married Harold Holznagel and over the years, they were blessed with 3 children – Mindy, Wayne and Rhonda. Shortly after the wedding, Harold joined the air force. They relocated several times during Harold’s military service and moved back to Washburn for a short time before settling in Bismarck for the remainder of their lives. Janyce worked at Case Implement as a bookkeeper for many years, but her main job was raising her children. After retirement, Janyce and Harold went on their dream vacation to Alaska. For the next thirty years, they camped in the mountains and enjoyed their children, grandchildren, and great grandchildren.

Janyce was preceded in death by her husband Harold, her parents Russel and Ferol Anderson, her brothers Lloyd and Bruce Anderson, and her beloved grandson Ethan Holznagel.

Wayne, this is Stephanie Melstad Olson (remember playing whist and debate team in high school?). Just want to say how sorry Steve and I are for your family’s loss. Appreciate that even though she lived a rich, long, full life, it is still a loss. We lost my dad in 2019 and Steve’s mom in 2021. They both lived to be in their 90’s, but we still miss them both.

Thank you for your note of condolences. It has been difficult losing both parents in the space of a few months. I do remember the games of whist. I am sorry to hear of your losses also.