Posted at 17:11h in Uncategorized by kkbold 0 Comments
Share: 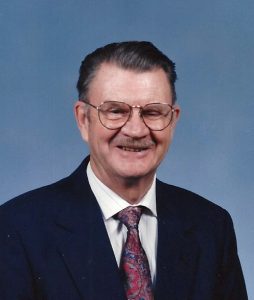 Henry was born August 29, 1923 to Andrew and Amelia Wisness in Keene, ND, the youngest of their eight children. He attended school in Keene and at the age of 16 he left the homestead to attend college at North Dakota Agricultural School (NDSU), where he studied agriculture in the first year but decided engineering was more suited to him and graduated with a degree in civil engineering. He holds the North Dakota record for length of time being registered as a Professional Engineer.

Henry and Amy Swenson were both from western North Dakota but didn’t realize they were meant for each other until they both lived in Bismarck. They married May 14, 1949.

Henry worked as a land surveyor for Skaar Engineering in Bismarck for many years. He then worked for the ND Highway Department until retirement in 1988. He was the head of the secondary roads department. One of his proudest accomplishments was his involvement in the Rails to Trails Program.

Fishing and hunting were a large part of his life, bring home lots of fish and game for Amy to cook for the family, not always appreciated by his kids. There were many other interests and organizations that benefited from his involvement; Toastmasters, Lions, bowling, square dancing with Amy and Sons of Norway. Both Henry and Amy were deeply involved in Trinity Lutheran Church in Bismarck. After retirement he and Amy used their RV and traveled the country.

He was well known for his quiet strength and love of jokes and riddles. He will be missed by all those who love him.

Kelly & Donna Berg
Wisness Family, So very sorry for your loss. Hank was such a dear man to all of us. He will never be forgotten. Deepest sympathy, Kelly, Donna, and Kari

Carolyn (Renbarger)  Benjamin
Hank was such a nice man! Prayers to his entire family.

Joh Dillavou
I Was Blessed to have shot Snow geese with Hank. Fond memories of a Good Man.

Dave Leftwich
Amy and family, Henry was a great mentor and friend. He also had those great Lion garbage bags I used to get. Henry was kind enough to share his insight and wisdom he had acquired over his many years working with the County officials before he retired from Secondary Roads. I am very thankful for having known and worked for him. We will keep you in our thoughts and prayers

Linda Krein
Wisness Family: Hank was my boss during my time at Secondary Roads. I remember him as being a very kind, gentle, humble man. I remember the day that he called me into his office and told me that my job was eliminated. He was deeply concerned and I knew he had a difficult time telling me. I would read the mail to him. Many times, we would share a good laugh between us. I’m so thankful that I was able to get to know him and work for him. Keeping you all in my thoughts and prayers.

Jerry Schimmelpfennig
Hank was a wonderful neighbor and friend. It was always fun to be with Hank, especially when fishing with Hank and my Dad, Herb, at Lake Namew and Keep Lake. Being known as a good man is the greatest compliment that can be given, and Hank truly was a good man. Condolences from the Schimmelpfennig family.