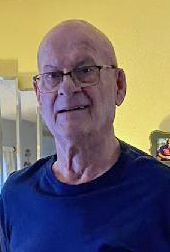 Posted at 15:56h in Uncategorized by staff 3 Comments
Share:

Eugene “Gene” J Emter 79, Bismarck, passed away peacefully on August 18, 2022, with his loving family by his side.  A memorial service will be held Tuesday August 23 at 11 am at Bismarck Funeral Home.  Visitation will be held one hour before the service with a luncheon immediately following.  Burial will be at St. Mary’s Cemetery, Bismarck, following the luncheon.

Gene was born to Michael and Barbara (Doll) Emter on June 4, 1943, in Elgin, ND.  He was raised and educated in Glen Ullin and Bismarck.   Gene married Arlene Schutt on October 27, 1973.  Gene and Arlene made their home in Bismarck.

Gene worked as a heavy equipment operator for several companies throughout Montana and North Dakota.  He retired from Mariner Construction in 2013.

Gene enjoyed camping and fishing in his younger years.  He also enjoyed spending time with his family and love being “PAPA” to his grandchildren.

Gene is survived by his wife Arlene, son and daughter-in-law, Brian and Crystal, their children, Madisyn, Meagan and Mason.  Daughter and son-in-law, Kelly and Robert Behm, their children, Britney and Brady, all of Bismarck.  Sister and brother-in-law, Del and James Horner, sister, Gladys Glaser, brother and sister-in-law, Adolph and Christine Emter.  He also leaves behind many in-laws and numerous nieces and nephews.

We would like to Thank the Staff at Missouri Slope Washington Campus and Sanford Hospice for the care they provided.

Arlene and family: I am so sorry for your loss. My thoughts and prayers are with you all during this difficult time.

Arlene, We are so sorry to hear about Gene’s passing. He was a Great Man & will be Deeply Missed !! Prayers for you Brian & Kelly & all their families 🙏

Arlene, I’m so sorry to hear about Gene. Thinking about him brings back some great memories of years gone by. Guess we fell out of touch. He’ll be partying with Bob up in heaven having a heck of a good time! Bob passed on my birthday, June 29, 2018. He’ll be so happy to see him there. My love to you and your family in this very trying time. Take care. Myrna Wetch