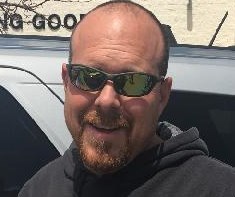 Posted at 20:18h in Uncategorized by staff 0 Comments
Share:

David Allen Sundhagen, 44, Bismarck, passed away at his home while under the care of hospice on August 20 after a courageous 15-month fight with brain cancer.  Services will be held at Good Shepherd Lutheran Church at 1 pm on August 27, 2020.  Visitation will be held one hour prior to the service.

David was born on April 5, 1976 to Richard and Nancy (Kiesz) Sundhagen in Tioga, ND.  He attended and was confirmed at Zion Free Lutheran Church.  He received his elementary education at Central Elementary School and graduated from Tioga High School in 1994.  He attended NDSCS in Wahpeton from 1994 to 1996.

He worked for numerous local companies during his high school years.  After college he moved to Minot and worked at Menards after which he moved to Bismarck in the spring of 1999 while still employed there.  He worked at Edling Electric from 2005 to 2006.

David married his high school sweetheart Amber Nygaard on December 18, 1999.  They made their home in Bismarck.  Their daughter Riley was born in December 2005 after which he decided to become a stay at home dad to raise her.  During this time, he also pursued his love of working on cars.

His hobbies included camping with his family, four wheeling and kayaking with Riley, fishing, woodworking and just spending time outdoors.  He also enjoyed starting projects around the house which did or did not get finished.