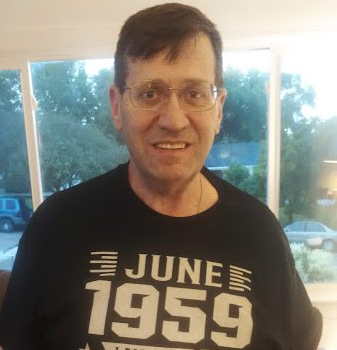 Posted at 20:24h in Uncategorized by staff 12 Comments
Share: 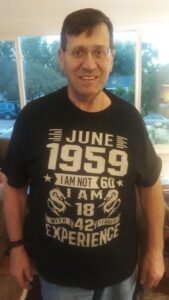 Dan Kersey-Russell, 63, of Bismarck, ND passed away on December   27th, 2022 after a long battle with pneumonia due to several viral infections and health issues.

A memorial service will be held at 11:00 AM on Friday, December 30, 2022 at McCabe Methodist Church, Bismarck, ND.   Family will be receiving friends one hour prior to the service.  A livestream of the available on the church website, https://www.mccabechurch.com/livestream/

Dan was born on June 29th, 1969, to David and Janice (Brown) Russell in Oceanside, CA at the US Naval Base Hospital in Camp Pendleton. His mother remarried and moved the family to Grand Forks, ND. He became one of eleven brothers – step, full, and half.  After Dan graduated from Central High School in 1977, he married and had three children.  He was the second chef on staff at the iconic Whitey’s in East Grand Forks for the next 23 years where he learned the art of making liver pâté and chicken wild rice soup.

In 1997, Dan met Jeanine (Kersey) O’Neal. Dan and Jeanine married and changed their last names to Kersey-Russell on April 17th, 1998. Both very independent and looking for interdependence, they combined their names into one. Dan adopted Jeanine’s son, Bill, and went on to have triplet boys and adopt five more children. Their marriage was a strong one of work and play that lasted 25 years. Dan loved fostering children; together, they had over 80 children come and go from their home.

In his work life, Dan had many jobs. In Bismarck, he worked at St. Alexius in housekeeping, at the CAT bus as a driver, Denny’s as a cook, and Good Samaritan Nursing Home. Most recently, he was a bus driver for Harlow’s bus service taking children to and from school which he loved.

Dan had many hobbies, and all revolved around his love for his children. He began volunteering with the Boys Scouts in the late 90’s. During his time in Scouting, he helped as a scoutmaster and was the proud father of four Eagle Scouts. When at home, he and his family worked together on a variety of home projects including building a treehouse for their kids. He loved the outdoors and camping, and instilled this love in his children. Dan also liked to travel with his family and made many happy memories across the U.S.

Dan will be deeply missed by his family and many friends.  They draw comfort in knowing that he is healthy and is reunited in heaven with his parents and several other loved family members and friends.

Jeanine and Family
Please accept my deepest sympathies on the passing of Dan. I will be keeping your family in my thoughts and prayers.

Condolences to Dan’s family i fist meet Dan when I started to ride the Cat to my work at Human Service center usually he and I were the only 2 on the 6:30 AM bus, so proud of his family. When I joined McCabe here he and family were there. So devoted to his family and all the young children that came to stay with them
God Bless.

We were so sorry to hear of your loss. It sounds as if Dan lived life to the fullest, and left a wonderful legacy of works and memories. Love and prayers. Roger and Jan Schmid

My condolences and deepest sympathy towards you and your family. I worked with Dan just one summer and he will be missed this upcoming year.

My deepest sympathies and sincerest condolences to Dan’s family. I was a nurse at St. Alexius. Dan was always uplifting and a joy to visit.

To Family of Dan:
I am very sorry to each of you for your loss. I got to know Dan very well when I started riding the CAT Bus. We became friends instantly!! He was definately one of my top favorites!! Always nice talks and lots of laughs together. I was sad when he no longer was a driver thru them; however we did run into each other a few times at places (wish it could been lots of times) but it was always a very nice visit; even if it wasn’t long. We always greeted each other with a Big Hi and big hugs to each other!! Gosh, I will miss him even more so now. Again, I am very sorry to his family. My thought, prayers and hugs. May God comfort you all.

Jeanine and family, I’m so sorry for your loss. Dan was such a good friend when we drove the CAT buses together. I always looked forward to working with him because he was always so positive about life no matter what struggles came. My prayers are with all of you.

Jeanine and family,
My prayers are with you at this time. I am sorry to hear of Dan’s passing. Your family has been so important in the lives of other. May he Rest In Peace. Darlene Hill

Jeanine and family–I offer my deep and heartfelt sympathy on the loss of your precious, Dan. I worked with both Jeanine and Dan at Good Samarian and loved working with them both. Their love for each other was so evident. I pray for God’s unwavering peace and comfort over you, Jeanine, as you navigate life without your love. No doubt that Heaven gained a beautiful angel.

My sympathies to you and your family in the passing of your husband. We will be praying that God will provide his comfort and provision to you. Bismarck-Mandan Gideons

Henry, Kenneth, and Preston –
I didn’t realize I graduated from HS with your dad. I knew him as Danny Russell. I’m sad to hear of his passing and pray God’s peace for you and your family.
Blessings,
Beth Weiss

Dan was the bus driver to my 2 sons up until he passed. I’m so saddened to read this! I never met him, but he surely left an everlasting impression on my sons. They spoke of him often and recently made remarks about how riding the bus hasn’t been the same without him! Thank you for your service to our community Dan. You will be missed by many. My deepest condolences to the family. You will be in my prayers.