Posted at 23:09h in Uncategorized by staff 0 Comments
Share:

Memorial services will be held Monday, March 2nd, at 10:30 a.m. at Bismarck Funeral Home. A visitation will begin one hour prior to the service.

Curtis was born on November 12, 1937 on a farm north of New Leipzig to Christ and Wilma (Haas) Guenther. He attended country grade school and graduated from Mott High School. It was there that he met his wife Karen Kelsch. Together they had four children, Gina, Kurt, Colin and Julie. They moved to Dickinson and Curtis worked for Bogner Appliance and Sears until his retirement. Curtis proudly served in the N.D. National Guard and was inducted into the NDARNG Marksmanship Hall of Fame. He lived in Williston, ND before moving to his present home in Wilton. Curtis enjoyed working in his yard, tinkering in his shop, dancing and visiting with friends at the local Senior Center along with spending time with his daughter and sons.

He was preceded in death by his daughter, Gina Dvorak, his parents, two brothers and four sisters. 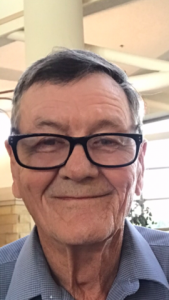