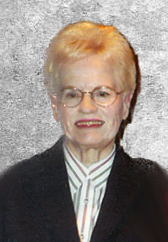 Posted at 19:35h in Uncategorized by staff 4 Comments
Share:

Claire Anne Holmberg, longtime Bismarck businesswoman, died January 21 in hospice care. Claire Anne was the former general manager of KFYR-TV. Breaking the glass ceiling ‘way ahead of her time, she joined KFYR as a graphic artist in the 1950s and worked her way up.

Also a civic leader, she served on the boards of the Bismarck Parking Authority and Sanford Hospital. She was also a faithful subscriber to the Bismarck Symphony Orchestra, inviting friends to fill the vacant seats in her box.

As a young woman, she studied commercial art and drove a stylish small British car, a Morris Minor. She was proud of the fact she maintained the car herself. She enjoyed camping, archery and hunting game birds with her father.

Claire Anne’s career was important to her, but never more so than her family. When Donna married and had five children, Claire Anne became a second mother to them. She had two obscure “talents” that consistently frustrated her nieces and nephews: She could guess the content of any present just by looking at it, which made it virtually impossible to surprise her. And she could quickly find anything that was hidden from her, like the giant chocolate Easter bunny they bought for her every year as a guarantee she wouldn’t bite off their rabbits’ ears.

Like all her family, Claire Anne was a dog lover. Her first dog as an adult was an English Cocker Spaniel. Later, she had a Miniature Poodle and several Shi Tzu. After she went into the nursing home, her nieces and nephews took their dogs to visit her as often as possible. They would climb up on her bed to receive loving and skillful ear rubs.

Claire Anne was preceded in death by her parents and her sister Donna Carmichael. She is survived by her nieces Claire Carmichael (John Trafelet) and Robyn Carmichael (Phil Von Oepen) and her nephews: Jamie (Linda), Peter and Paul (Patty). Also surviving her are three great nieces and five great nephews as well as 8 great-great nephews.

I worked for Claire Ann in the late 60s in the silk screen department at KFYR, she was very professional but had a heart of gold, She was a good person and a good boss

Claire Anne was most certainly a trailblazer in broadcast media.  We worked together at Meyer Broadcasting for 40 years. She will be missed by all who knew her. Our deepest sympathy to all her extended family. Karen and Mert Johnsrud

Claire Anne was a sweet lady and dear friend. She will be greatly missed.

I worked for Claire Anne from 1972-1986 at KFYR-TV. I started as a Commercial Artist and worked up to the Art Director.
She was very Professional and a great artist. I valued her opinion and looked up to her.
We became good friends in the last years. She was kind and loved animals.
She will be missed by me. Deepest Sympathy to her family.