Posted at 13:47h in Uncategorized by staff 0 Comments
Share: 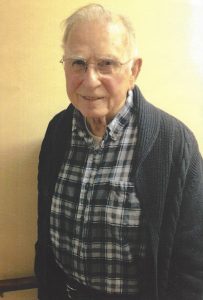 Robert Albert Mehrer, 88, died of natural causes on July 2, 2020 at Elm Crest Manor in New Salem, A Funeral Service will be held on Wednesday, July 15, at 10:00 a.m. at Zion Lutheran Church, Bismarck with Rev. Thomas R. Marcis Jr. officiating.  Burial will be held at Sunset Memorial Gardens.  A Livestream of the Service will be available on the Bismarck Funeral Home Facebook page.

Bob was born on Nov. 2, 1931 in Bismarck, ND, the only son of Otto and Alpha Mehrer.  He was baptized in 1934 at Trinity Lutheran Church in Bismarck and was raised attending church every Sunday.  His faith was important throughout his life.

Bob graduated from Bismarck High School in 1949 and Bismarck Junior College in 1953.

As a proud American, Bob became a member of the North Dakota Army National Guard in 1950.  He served in the Korean Conflict and was honorably discharged from active duty in 1953.  His career was working full time as a Federal Military Technician for 37 years, retiring in 1987.  He retired from the North Dakota Army National Guard in 1991 as Chief Warrant Officer, W4, after serving many roles in the military impacting multiple units including Maintenance, Supply and Administration.

Bob and Alice had 3 children, Kenny, Karen and Kevin.  Bob always put his family first and worked hard to instill family values.  His grandchildren meant everything to him.  He preferred to spend his time taking them camping, bowling and fishing.  Bob was a very generous man; he once took his entire family on a cruise to Mexico.

He loved sports, especially softball and bowling.  In his prime, he pitched both fast pitch and slow pitch.  He loved the challenge of fishing, although he didn’t like to eat fish.  Bob’s favorite food was sugar!  He always smiled when offered a candy bar, piece of cake or pie or strawberry ice cream.  Bob also enjoyed talking politics and working on his computer.  He spent countless hours researching his ancestors and tracing his family tree.

He was preceded in death by his wife of 52 years, Alice, his parents, his grandson Curtis Mehrer and sister in law Lois Bickel.

To view the funeral service for Robert, please click here.