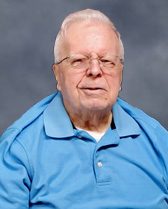 Posted at 17:52h in Uncategorized by staff 0 Comments
Share:

Les was born December 19, 1933 to Pevis and Anna (Kary) Heck in Ft. Rice, N.D.  He was raised on a farm with his 10 other siblings. Based on some of the stories shared over the years, they all worked hard, but good times were had as well.

After finishing high school and upon leaving the farm, Les enlisted in the US Army in Jan of 1954. He served in the Korean War, and was stationed in Germany, where he served as a telegraph specialist.  When he was discharged from the Army, he spent 11 years as the parts manager for the local Ford dealership, Raymond Ford, servicing vehicles throughout the area, and making many friends in the community. For a short period after that role, he moved to Fort Yates, ND and with his family, owned and operated a grocery/general store. Eventually, he wanted to get back to his enjoyment of service/parts and vehicles, and this led him to opening a Champion Auto store in 1973, on the Strip, in Mandan, ND.

Later, as he enjoyed success, he opened 2 more stores, in Bismarck and Minot, in partnership and working with his brother, Don.  After many years, and wanting to relax and enjoy retirement, he sold his interests and spent his final years in Bismarck.  During these busy years, he always tried to find time to go fishing, as he loved to do this with whomever would join him, especially with his brothers.  Les will be missed by all.

He was preceded in death by his parents, brothers Art and Terry, and his sister Diane.

Due to the recommendations regarding Covid-19, A Memorial Service will be held at a later date.

I remember when I was in high school and desperately needed tires for my car. I had gotten 3 flats in one week. Mr. Heck had new tires put on my car and I paid him a little at a time until I got them paid for.   He was a really good guy. Sorry to hear of his passing.