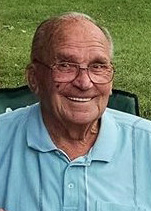 Wendelin (Wendy) Scherr, 86, of Bismarck left his earthly dwelling for his heavenly home on Friday, January 3, 2020.  Mass of Christian Burial will be on Monday, January 6, 2020, at 10:00 a.m., at the Church of Corpus Christi.  Visitation will be one hour prior to the start of the service.  Burial will be at 3:00 p.m. at the North Dakota Veterans Cemetery, Mandan.

Wendelin was born to Wendelin and Christina (Weigel) Scherr on October 17, 1933 in Napoleon, N.D. Wendelin was number 8 of 14 children and from a young age remembers working to help the family through the post- depression years. His first job was at the age of 6 sweeping out the local movie theater and his last job was at the age of 74 building his final sale home. Wendelin was drafted into the U.S. Army in 1954 and served in the military for three years. Wendelin married Lois Larson on November 9, 1953 in Bismarck. They lived in Bismarck their entire married life except for the Army years stationed in Stuttgart, Germany. As a self-employed home builder and developer under the name Wendy Scherr Construction, he built many family homes and developed land in northwest Bismarck. Wendy and Lois raised 4 children, Wendy Jean, Brenda, Jeff and Kent. Lois died in 1992. He married Marlys Stein in 1994 and she died in 2006.

Wendelin was active in Knights of Columbus, Bismarck Horse Club, Bismarck Mounted Police, Bismarck-Mandan Home Builders, Badlands Trail Riders, and DeMores Riders. He was a member of the Church of Corpus Christi. He enjoyed traveling to Mexico during winter months, gardening and spending time with family. His hobbies included horseback riding, hunting, and fishing. He loved reading to and playing with his grandchildren and great grandchildren and always had plenty of hugs and kisses available.

He was preceded in death by his wife Lois, his wife Marlys, his parents, and seven brothers and sisters.

We are grateful to everyone involved with his care during his final days. CHI Hospice in Bismarck and Valley City and the wonderful caregivers at Ave Maria Village in Jamestown.