Posted at 16:53h in Uncategorized by staff 0 Comments
Share:

Thornton Art Stark, 92, Lincoln, ND passed away October 1, 2019. Burial will take place in Harvey, ND, where he is originally from. A memorial service will be held at 11:00 a.m. on Saturday, October 5th, at Bismarck Funeral Home. 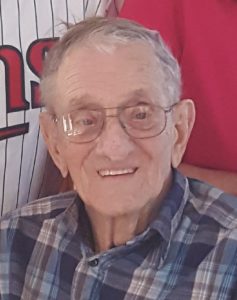 Thornton was born July 22, 1927, the son of Charles and Alma (Grochow) Stark. He grew up in Harvey, ND and graduated from high school there.  He then began a career with the railroad.

Thornton joined the U.S. Navy and served his country from 1951-1959.  While serving on the USS Manchester, he was able to see the bottom of the boat twice (a story he liked to tell.)

On June 3, 1956 Thornton married his sweetheart Mariann June Schlenker, with whom he had four children. Returning to the Soo Line Railroad, most of his railroad career took place in Thief River Falls, MN where he worked as a conductor.

Some of the hobbies he enjoyed were fishing, woodworking, playing word games, and watching sports, especially the Twins and Vikings games.