Posted at 20:12h in Uncategorized by staff 0 Comments
Share: 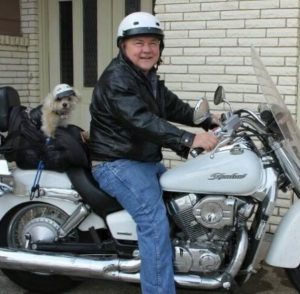 An immediate family visitation will be held at 3:00-4:00PM on Saturday, February 13, 2021 at the Bismarck Funeral Home. Open to the public visitation will be 4:00-5:00 PM following  with a prayer service with Pastor Scott Bauman officiating.  For those attending, please wear a mask and practice social distancing.  A Livestream of the Service will be available on the Bismarck Funeral Home Facebook page.

Terry was born to Oliver “Bud” and LaVon (Mahoney) Deschamp on May 19, 1959 in Bottineau, ND. He attended Westhope Public Schools graduating in 1977. At a very young age Terry was nicknamed “Fuzzy” and was affectionately called this throughout his years into adulthood.

In the fall of 1977, Terry in his Z28 Camaro took off for North Dakota College of Science in Wahpeton (formally NDSSS) where he earned his degree and played football. In 2017 Terry was a member of the 1977 Wildcat Football Team that was inducted into the NDSCS Hall of Fame.

After graduating he worked for Minnkota Power Co-Op Inc. in Center, ND. He along with co-workers spent many hours together commuting from Bismarck. Long days were spent when the plant went through outages.

Terry enjoyed attending his children Derrick’s and Kayla’s activities and sporting events. He passed along his problem-solving ability and creativity to his children. Terry was very proud of their success and the fine adults they have grown up to be. He shares a birthday with his grandson Jordie Jay.

Due to health reasons, he retired early from Minnkota. Terry lived with type 1 diabetes for over fifty years. He was a two-time kidney transplant recipient; one given by his brother Ted in 2002 and a second in 2011. Terry continued his passion of welding and mechanical innovations from his garage and shop. There he would spend countless hours on projects to perfect them with great pride and precision.

Terry was generous with his time helping neighbors and friends. He also stayed active working in his yard, riding motorcycle with his dog Tootsie (wearing matching helmets), dancing, and socializing with friends. He was known for telling stories at length and explaining topics with intricate detail.

He was preceded in death by his grandparents, parents, brothers Jackie and Todd.

A Celebration of Life will be held in June.

In lieu of flowers, please make memorials to the American Diabetes Association in honor of Terry.