Posted at 16:22h in Uncategorized by staff 5 Comments
Share: 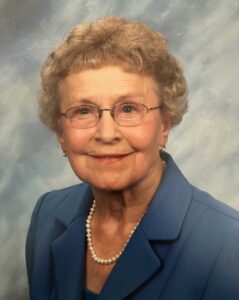 Olivia Miller went to her heavenly home on November 18, 2021, at the age of 98 following a brief hospital stay due to a fractured elbow.

A memorial service will be held at 11:30 a.m. on Monday, November 29, at Good Shepherd Lutheran Church, Bismarck, with the Rev. Julie A K Anderson officiating.  The service will be streamed live at www.goodshepherdbismarck.com   Visitation with family is one hour prior to the service.

Burial will be at North Dakota Veterans Cemetery, Mandan.

Olivia Marie Giese was born on December 30, 1922, at Elgin, ND, to Samuel and Julia (Kautz) Giese. She had five siblings—three sisters and two brothers.

Olivia graduated from Elgin High School and then attended Capitol Commercial College. She was employed at the Bank of North Dakota, State Auditor’s Office, and State Tax Department.

While in the State Auditor’s Office, she served as Deputy State Auditor and Director of the Gas Tax Division. She was elected Governor of the Central Region Gas Tax Conference and hosted the conference in Bismarck in 1970. She served as Director of the Gas Tax Division in the State Tax Department and was elected President of the National Gas Tax Conference in 1980 at which time she was in charge of the national conference at Lake Tahoe, Nevada. She retired in 1985 after a total of 41 years of service.

On November 6, 1949, Olivia married Pius Miller at St. Mary’s Church, Bismarck. They had one daughter, Linnae.

Olivia and Pius were active in bowling circles for many years and enjoyed golfing after their retirement. After Pius’s death, she continued to golf with her grandsons and best friend Sonja. Olivia helped with Meals on Wheels, belonged to a Bible Study group at Cathedral Church, and enjoyed playing Bridge with her friends. She belonged to Club America and had many travel adventures with the group.

Olivia was preceded in death by her husband Pius in 1993; her parents; sisters Elsie Dinyer, Nelda Vilhauer, and Hertha Beeney; and brothers Reuben and Wilbert Giese.

In lieu of flowers, memorials may be given to the North Dakota Veterans Cemetery or Good Shepherd Lutheran Church.

God bless you Olivia. May God take you through the gates of heaven.to rejoice in him.May perpetual light shine upon you.

Sweet sweet Olivia. I hope she and Mom have already played a few games of bridge and been out to lunch. My deepest sympathies to your family. She was a beautiful lady.

Dearest Linnae,
Your sweet Mom was a lovely lady, just like you. She had an amazing, long life. Hugs to you and the family.
Sincerely,
Cheryl and Family

Sweet Olivia. You deserve a peaceful rest after such a busy life. God bless you, wonderful lady.

Linnea and family,
Our sincerest sympathies with the passing of your mother. I remember her kindness and wonderful smile when she and your dad would watch your boys while we bowled on Sunday nights, all those years ago!! What a full and beautiful life she had, and a wonderful legacy to leave for each of you to remember. May God´s Grace bring you peace and your memories bring you joy.
Ron & Debbie Yeager