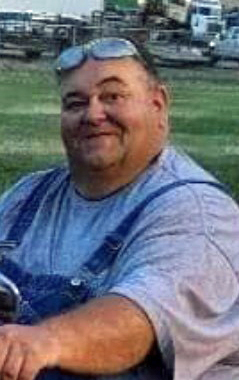 Posted at 18:34h in Uncategorized by staff 12 Comments
Share: 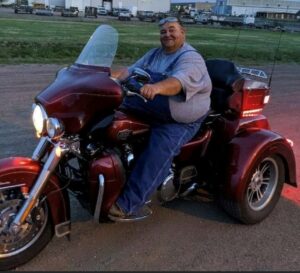 John was born in Hazen, ND, on November 24, 1972, to LeRoy William Reinhardt & Connie Ellen Mittelstadt Reinhardt. John was baptized on December 24, 1972, on Grandpa Reinhardt’s birthday. They resided north of Hazen, just to the south of Hazen Bay.  LeRoy and Connie moved to rural Almont, ND in October of 1977.  John and his older sister Colleen went to school in Almont. Due to the 1988 Almont school closure, John graduated from New Salem High School in 1991.

John attended Bismarck State College from 1993-1995.  Colleen remembers the day he got on her bicycle and started pedaling up the road, waving his hand, not looking back and shouting, “I’m going to college.  See you later!”  That was John.

John and his mother moved from Almont to Bismarck and would eventually move to rural Glen Ullin when his mother married Donald Kastner. Donald soon passed from cancer.  John was employed off the ranch; he always preferred ranch life and eventually became employed with Grant County, ND, keeping him closer to home.  In 2011, nephew Tenner Siroshton moved from Bismarck, ND to Glen Ullin to attend 7-12 grades, living with Uncle John until May of 2016.

John was proud of being a Grant County Commissioner, serving multiple terms.  As Commissioner, he also served on the multi-county Social Services Board.

“Maybe hard say how much more we get but also meat should be done (I forgot) and have meet people for it. But would be good cause get urs moms Pam’s Scotty dales picked up”! If you can read this, you know John very well!!  He was explaining that getting together for Easter this past Saturday would be good because it would allow him to pick up the newly processed meat at the butcher shop and then deliver it, but the forecast wasn’t really telling us the amount of snow we were going to get, so really, we didn’t know if we’d be able to get together or not. He had a way of sending a text like no other.

John enjoyed the time he spent with members of the Beulah Rough Riders Motorcycle Club and the Our Place Motorcycle Club.  He enjoyed being at the Clubhouses even before he had his trike.  He felt welcomed by these groups; often enjoying rides and hanging out at the clubhouses; meeting new friends and forming wonderful relationships.  Thank you, All, for your kindness!

John was a member of the ND Farm Bureau, holding down several hats, including being on the Grant/Sioux County Board and helping coordinate special events.  John was extremely proud of the strong values held by this organization.  Thank you, All, for your faithfulness to the farming/ranching community.

John’s side kick, Weasel, an Australian Shepherd, is a wonderful companion. She was found lying right beside him. She misses him very much.

Honorary Pallbearers – Anyone who considered John a friend.

Colleen, Connie and family Our thoughts and prayers are with you all.

Thank-you, so very much…

So sorry to hear about John’s passing. He was a great dance partner. Danced a lot of dances with him back in the day. Always had a smile on his face and so kind hearted. Prayers to all the family. He will be missed.

We extend our deepest sympathy to you all in your great loss. Served on Farm Bureau with John and have lots of good memories. God be with you and give you comfort.

I worked with John for several years when we were both with Grant County. He was such a great man. Loved to have fun. We will miss this man very much. God bless the family and give you peace and comfort at this time.

So sorry for your loss. When someone you love becomes that memory becomes a treasure. May those memories put a smile in your heart when the tears come.

Carolyn Feldman, your loving post gave me much comfort. Amen. John, was my Dad’s good friend when my Father Joe Silbernagel lived in Glen Ullin. I remember my Dad’s gatherings for a weekend of a pig being roasted in a huge dug out dirt hole? WOW! What a concept, what fun! My Aunt Lennie and I would check on the burning pig about every 2 hours! Geez! My father definitely loved hospitality with neighbors such as John and friends. John was one he spoke highly of and then he would laugh. I am grateful we were buddies as well. God Bless. Jolene Silbernagel.

Lori and I wanted to share our condolences with all of Johns family & friends. He will be missed. Love & prayers

I am so sad to hear of John’s passing. I pray for peace and comfort for Connie, Colleen, and the rest of the family. I have known John since fourth grade when we were classmates and neighbors. He had a kind heart and generous spirit. We spent many hours together on the school bus– I remember him as fun-loving with a ready sense of humor, and he often had jokes to tell. Rest in peace my friend.

John was my Father Joe Silbernagel’s good friend for many years in Glen Ullin. I am grateful he had many laughs with my Dad, as my father liked telling jokes as well. No kidding, there is an “art” to telling a good joke AND telling it right! John and my Dad had this gift. Much love to our families, because I know we miss and love them dearly. Praying for healing and peace. I bet John & my Dad are just ready to tell us a captivating, interest grabbing / funny story about a guy in church sitting in a pew with 2 ladies in front of them! God Bless. P.S. Sorry I don’t remember the joke. I wish I would have tape recorded it. Much love to John’s family and friends. Jo.

Dear Connie & Colleen, It is Sad to Read That John Passed away. He had so Much Passion For Life! I will Miss Seeing him at Different places! May God Be with You Both!!

I am shocked by the news of John’s passing. He and I went to college together at BSC. Used to hang out at “Archie’s” playing pool. He gave me the nickname “tattoo”. The story behind that nickname is something we’ll just keep between he and I. Lol We’d go dancing at rodeo dances and Whiskey Point and later at the Lonesome Dove. He sure was a very sweet guy whom everyone loved. I also did not know Colleen was his sister. My deepest condolences to everyone. He will be deeply missed.