Posted at 20:26h in Uncategorized by staff 13 Comments
Share: 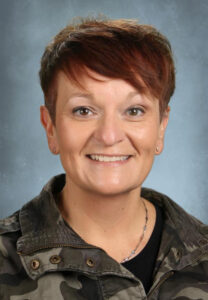 Jody Marie Olheiser’s story began on May 11, 1975, born to Gary and Barbara (Mindt) Fiedler in Mobridge, SD. She grew up one of nine Fiedler children in the tight-knit community of Glenham, SD. Oh the childhood stories that could be told if the streets of Glenham could talk! On a more tame note, Jody’s love for learning began in the Glenham school and ‘playing’ school on the weekends with her siblings at the kitchen table. The wonderful teachers and country school style of education she received there was the influence behind Jody’s belief and practice that every single student matters. She continued this love and was bit by the English bug as a student at Selby Area High School thanks to Mrs. Schwartz and Shakespeare, and she expanded this love of the written word from there.

After graduating from Selby Area High School in 1993, Jody continued her passion for learning and teaching while studying at the University of Mary in Bismarck, ND. It was while a student here that she met her soulmate, Joshua Olheiser. As the saying goes, “When you know, you know.” Jody and Josh knew they were meant to be after three months of dating. Thank goodness, the younger Fiedler siblings felt the same way about Josh as Jody did – they loved him and there was no chance they were running this one off. When Josh took a job in Valley City, Jody just had to follow that irresistible ginger. She transferred to Valley City State University, where she earned her Bachelor’s in English Education. She would later return to the University of Mary where she earned her Master of Education in Reading in December of 2020.

Jody and Josh were united in marriage on August 2, 1997. They welcomed two boys into their lives, Jakob Wyatt in 1998 and Joseph Dalton in 2001. Jody was a dedicated wife and proud mother, family came first. She was a proud Bismarck Demon momma whether in the stands or on the sidelines, she could be found cheering on her boys. Her creativity was showcased in the scrapbooks she made of the boys as they grew up. Jody’s birthday cakes were works of art, always reflecting the personality of the recipient. Thanks to Jody’s own award-winning personality, family game nights were epic in the Olheiser house. Her musical talents were endless, from playing the piano in elementary school to the clarinet in high school, college and impromptu jam sessions, but the vocal concerts she performed in the car were priceless. Jake and Joey especially loved her rendition of “Ice Ice Baby.” In 2005 Jody and Josh took their relationship to the next level, they bought their first Harley Davidson Motorcycle! Mrs O’s alter-ego emerged as Josh’s very respectful biker babe, frequenting the Sturgis Motorcycle Rally 14 times in the past 16 years. So many lasting memories were forged on the back of their Harley. Through these travels, their connection as a married couple grew from husband and wife to true best friends.

It is said that friendship is a single soul living in two bodies – and in Jody’s case, four bodies. A friendship like no other blossomed and flourished in her years at Selby. The Queen B’s as they called themselves, did everything and “almost” anything together. Jody was the Thelma to Robin’s Louise and Karen to Teresa’s Larry. Thank goodness for Melissa, who in the past 34 years has managed to keep them grounded and somewhat out of the trouble. Jody’s physical presence will be dearly missed on their annual girl’s weekend adventures. She will forever be their Soul Sister and Guiding Light in Heaven.

Growing up, Jody tortured her siblings with 49er football games. She really didn’t know much about football back then, but that didn’t matter to Jody – she was only concerned with watching the ever so dashing Joe Montana! Over the years, Jody developed into a knowledgeable and faithful football fan, as did her family. Jody took pride in the joy it brought the men in her life when given the opportunity to attend an NFL game of their favorite team. This year, it was supposed to be Jody’s turn. Besides football, Jody developed a love for running. She completed her 35th Half Marathon this year. The annual Turkey Trot was a family affair, and she was so excited to show off the matching t-shirts that she and Josh were going to sport for this year’s event.

‘The mediocre teacher tells. The good teacher explains. The superior teacher demonstrates. The great teacher inspires.’ – William Arthur Ward. Every student deserves a great teacher – one who never gives up on them and understands the power of connection. A teacher who insists each student become the best student and person they have the potential to become. That was her teaching philosophy, one that started with her first teaching job at Tappen, carried into her next role at New Salem and then during the last thirteen years while she was teaching English and serving as a coordinator for the Avid program at Bismarck High School. Jody was a great teacher who loved the opportunity to learn from her students as much as instruct them. She often shared their accomplishments with friends and family, including a recent community effort taken to the streets to spread kindness through a Kindness Tailgating Party. Despite her not being physically with us, please continue to share this gift of kindness with others and continue to celebrate her every day through a small act of kindness, such as a smile and hello, brightening their day as she did ours.

Jody’s motto in the classroom and in life was Live a Great Story! While there are many chapters in Jody’s story, there was a consistent theme of love of God, love of family, love of friends, love of teaching and love of life. Her earthly story as written by Jody, came to a close as she was called to her Heavenly Father on November 25, 2021, all the while surrounded by those who  truly loved her. Fortunately for us, her story will continue with those who had the privilege of knowing and loving her, especially her husband of 24 years, Josh; her sons, Jake and Joey; her mother, Barbara, her in-laws, Arnie and Sharon Olheiser, her siblings, Martin, Nancy (Brian) Larson, John, Sara, Emily (Brent) Gill, Aaron (Winter), Nicholas and Adam (Daysia); as well as her brother-in-law, Jason (Melissa) Olheiser. She will always hold a special place in the hearts of her many nieces and nephews, birthday cards were highly anticipated thanks to her sometimes warped sense of humor – she never disappointed. Jody took so much pride in the accomplishments of these young family members, Skylar, Cael, Gracin and Hayden Larson, Evelyn, Kendyl, Quayde and Cayn Gill, Bexley, Hazel and Vincent Fiedler, Hillary, Matthew, Ethan and Noah Olheiser. She was blessed to have had the opportunity to welcome the newest members of the family, Aspen and Willow. An emptiness will be forever felt for the best friends a girl could ever ask for – Robin Salverson, Melissa Flor and Teresa Meister. Jody will continue to be the spiritual role model for her God Children, Cael Larson and Trinity Flor.

Mass with Christian Burial will take place at Ascension Catholic Church in Bismarck, ND on December 1, 2021, at 10:30.  Visitation and viewing will be held from 5-7pm on November 30, 2021, at the Bismarck Funeral Home & Crematory, with a prayer service to follow.

She will be terribly missed by all who were blessed to have known her in this life, and she will likely be sitting over this with a Pumpkin-spiced flavored coffee and red pen scrutinizing the grammatical errors, preparing to review that with us all when it is our turn to join her and all who rest in peace with God in the next chapter of this story of life.

Absolutely beautiful. Jody had such a heart for all of our students. She worked so well with our students with disabilities and truly felt all children deserve to learn. She would welcome struggling learners with open arms. Our heart aches for those lives who didn’t yet have her as a teacher and rejoices for all those you did. Rest in sweet peace Jody.

I will miss you very much Mrs. O, we had so much fun in your class and you always liked to giggle how much I was like my aunt especially about Animal Farm and I will always remember the cheesy Shakespeare quotes. Never trust a clown long live Shakespeare

I’m gonna miss you, Mrs. Olheiser. You were just about the best teacher anyone could ask for, and I’ll carry you with me for as long as I live. Thank you so much, for everything.

Rest easy O, You’ve impacted so many lives, and you have such an amazing soul. I’m gonna miss ya <3

Jody will be missed by so many. Her beautiful spirit will live on in her family and all those she impacted. I will never forget her distinguished capstone presentation when she finished her masters degree at U Mary. She was a giant in her field and a model of Christianity and servant leadership. Mrs. Olheiser will always be a favorite teacher to countless students including my sons. Heaven has truly gained an Angel. Deepest condolences to Jody‘s family.

This is a fantastic tribute full of humor, love, spice and personality, just like Jody. Thanks for this and thank God for Jody’s time on earth.

rest easy I didn’t ever get the chance to meet you but I sure wish I had the chance you seemed like the sweetest lady ever! Prayers sent to the family and friends!

I’m gonna miss you Jody. You brought so much joy to my life as soon as I had you the first day I knew that this was going to be one of the most amazing people i ever met you never put your self first and you always knew how to make me smile I miss you so much and can’t wait to run up and give you a hug in heaven. Rest easy❤️🕊

Eileen and I would like to extend our most sincere sympathies and want the families to know our prayers will continue as this journey of grief goes on. May she rest in peace and may our God grant peace and strength to Josh, Jakob, and Joseph.
Sincerely Christ Dukart – your old hunting buddy

I am going to miss you, Mrs. Olheiser. It was an honor being your student and I really enjoyed having you as my 9th grade English teacher. Thank you for everything you have done for me and my sister. Prayers sent to family and friends. Rest in peace Mrs O and it’s truly an honor. We will all miss you.

Jody was my English teacher in New Salem and was the one who got me started in Speech. She was one of a kind! I consider myself so lucky to be one of her students. God be with all of you through this hard time.

I did not even know this woman, but being an English teacher, I want you to know she gave you an A on your writing. It made me feel like I knew her and could only wish I was one of her forever friends. With deep sympathy and rejoicing to have had her in your life.

I was shocked to learn of Jody’s passing, this morning, as I watched the student kindness campaign that was featured on KFYR. Yes, indeed, Jody would have loved that demonstration. I very briefly knew Jody during her Tappen School years, and we followed each other on Facebook until this past year. Truly, what a blessing she was to all who knew her. My heart and prayers go out to her family and friends. 🌸