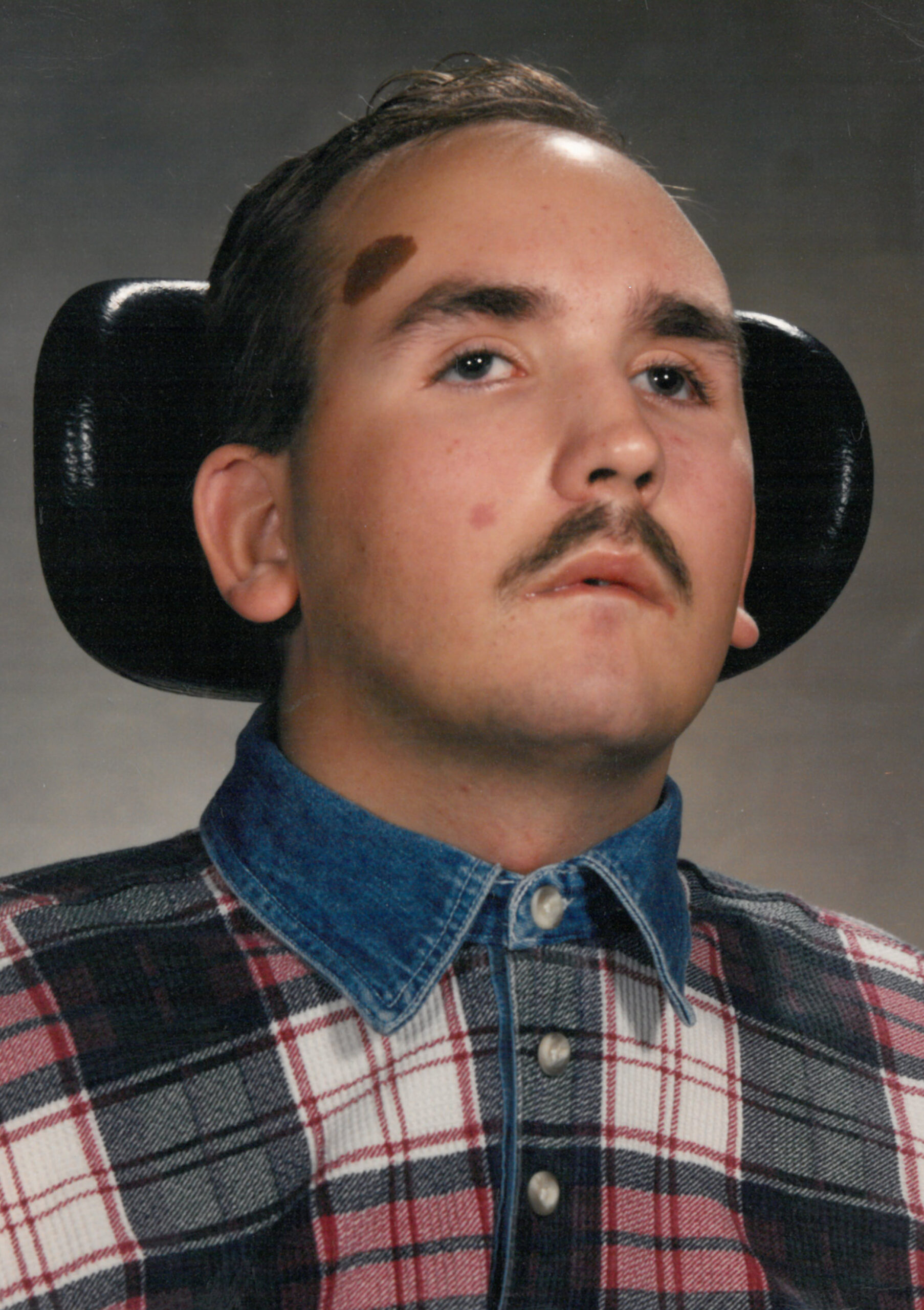 Posted at 20:48h in Uncategorized by staff 16 Comments
Share: 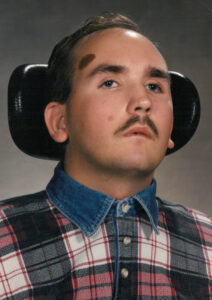 Jamie Scott Gange, 46 of Bismarck, passed away November 17, 2021, surrounded by his loving family.

Jamie was born September 6, 1975, in Bismarck to Leonard and Denise (Heydt) Gange. He was baptized and received First Holy Communion at Ascension Catholic Church. He was confirmed at the St. Alexius Hospital Chapel by Father Ron Yee Mon who Jamie had a great admiration for. Father Ron is a wonderful person who went out of his way to be there for Jamie and his family, and for that they are eternally grateful.

Jamie attended Jeanette Myhre Elementary School and Wachter Middle School. His parents were Den Leaders, and he was a Cub Scout. Jamie had an amazing talent and love of music. He played drums in band all through his school years. He was picked and invited to play at special all school concerts at the Civic Center. In 1988, the family moved to Drake, ND where Jamie attended Drake High School. Jamie was a thoughtful and imaginative writer. Writing his own songs and music, poems, and short stories, one of which was picked to be on display at the Heritage Center. He enjoyed doing parodies of popular songs to make them his own and always much more humorous. He created a radio broadcasting company in his home where he would write radio shows and record him and his friends “live on air” talking and playing music similar to what listening to a podcast now is like. He attended International Music Camp at the Peace Gardens. During his high school years Jamie worked as a DJ helping his uncle Dennis at dances around the state of ND. His passion for music was encouraged and nurtured by many people but especially by his uncle Dennis who also loves music. They had a very special bond because of this. Jamie’s favorite artist, as anyone who knew him knows, is Madonna. He shared many of the same qualities as Madonna. Multi-talented, hardworking, with strong beliefs and the courage to always stand up for those beliefs and to speak his mind even if it meant “causing a commotion”. He was and always will be her biggest fan. In 1994, Jamie moved to the Anne Carlsen School in Jamestown. It is an incredible organization for individuals with developmental disabilities. He received the best care from wonderful loving people. Jamie was visited by and got to meet Governor Ed Schafer and Senator Byron Dorgan while there. During this time his uncle Dennis and sister, Michelle had many dances for Jamie and the students and staff at Anne Carlsen. In 1998, he moved to St. Aloisius nursing home in Harvey. In 2011, Jamie and his parents moved back to Bismarck. He lived at St Vincents Care Center, where he was well taken care of, until his passing.

The family would like to thank everyone over the years who took care of, visited with, and prayed for Jamie. With special thanks to his and our family and friends. A particular remembrance for Jamie’s grandmothers who both loved him dearly. They visited him as much as they could and always sent him cards, letters, and prayers.

Leonard and Denise loved their son more than could ever be expressed with words. The way they deeply cared for Jamie is unlike anything you have ever seen. All they ever wanted is the best care there was for him and they fought every single day for almost thirty years to do what they thought and felt was best. No matter what they faced they never EVER gave up or backed down from going to battle for him. When the family lived in Drake they would bring him home from the Anne Carlsen School for visits and holidays so he could be with his family. They took care of him at home with no nurses or help. Not very many people would be brave enough to do that and they did until they physically couldn’t anymore. Their dedication and devotion for Jamie was unwavering.

Jamie was preceded in death by both sets of his grandparents and brother, James Lee Gange.

He is survived by his parents, Leonard and Denise (Heydt) Gange; sister, Michelle and husband Tony Bjerke; and numerous uncles, aunts, and cousins.

Love and prayers Jamie. May you Rest In Peace. Thinking of you, Uncle Leonard, Aunt Denise and Michelle

RIP. Jamie. Deepest sympathy to all of you 🙏 We love you. Aunty sandy

RIP Jamie. I’ve thought of you often over the years. So many memories with you when we were kids. You always made me laugh.

Prayers go out to your whole family. I am so sorry for your loss. Leonard you and my deceased husband, Alvin Leiss, go back a long time.

I remember his love for music. He’d come over to my house in Drake & hang out with my daughter Nicole. RIP : from aunty sandy

I am so very sorry for your loss I enjoyed taking care of Jamie over the years as a CNA and eventually a nurse, Jamie taught me so much as a person and I’ll miss listening to Madonna with him in his room! Rest In Peace sweet boy love Miranda RN

To the Gange family and loved ones – my deepest sympathies to all of you, esp. Jamie’s long suffering and devoted parents. You are the best. Jamie was always special to me. I enjoyed his talents. He created a vid on St. Francis with the music of Madonna for our Confirmation class many moons ago. Thank you for remembering me. I’m including a photo of the Confirmation I administered with the permission of Bishop Sullivan at the time. Thank to all the caregivers. God bless us, everyone. May Jamie find the peace he yearned for in this life. Eternal rest grant unto him, O Lord… (Rev.) Ron Yee-Mon, S.T.L. 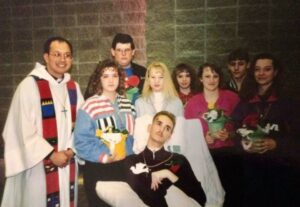 Leonard and Denise – you have my sincerest sympathy at this time of great loss . He loved his music and I enjoyed listening to it to . I’m sending you both hugs and will miss seeing you guys . Would love to attend the service but have to work . He will be missed it will not be the same at work . Leonard you can still visit us we are good listeners if you need to talk

Leonard and Denise you have my deepest sympathy. You were always very dedicated to Jamie giving him the best life that you could. My thoughts and prayers are with you.

I’m very sorry for your loss Leonard and Denise. I really enjoyed caring for Jamie. I told him about my life and anything that I was thinking about. You were wonderful parents. I’m sorry. Chris Schirado

So sorry for your loss Gange family. The love you showed your son never went unnoticed. Miss seeing you.

Praying for you guys in your time of need, I really enjoyed caring for Jamie and visiting with the whole family. May he rest in peace. -Jackie

My deepest sympathies to your family. Jamie was blessed with love and dedication by his parents.

I am full of deepest sympathy. My sister, Dona Vogel would be filled with sympathy also, as a friend of Denise and cousin to Leonard. God Bless.

Rest in peace, Jamie. You and your family have been in my thoughts and prayers all of these years – since being your occupational therapist at the Anne Carlsen Center. Sending love and light.