Posted at 21:18h in Uncategorized by staff 0 Comments
Share: 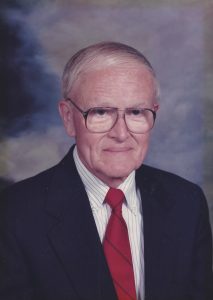 Mass of Christian Burial will be held at 10:30 AM, Wednesday, January 13, 2021 at Cathedral of the Holy Spirit, Bismarck. If unable to attend, go to https://venue.streamspot.com/event/MjQ3ODg4MA== to view mass.

Burial will be held at the North Dakota Veterans Cemetery, Mandan, ND.

Jim was born on February 4, 1928 into a second-generation Irish Catholic American working-class family in Pittsburgh, PA.  Jim was always a bright student, inquisitive, and curious about the world.  He attended parochial and public schools, graduating from Liberty High School in Pittsburgh, obtaining his Bachelor’s degree from Duquesne University, Latrobe, PA, and his Master’s in Business Administration degree from the University of Pittsburgh.  But what really set Jim apart was his ability to relate to people in all walks of life.  In fact, he made that his profession, with a long career in the Human Relations field, in the steelmaking, atomic energy, insurance, and coal industries, ultimately retiring from North American Coal Corporation in April of 1994.  Jim was proud of his family, and he was always involved in their lives, helping, encouraging them, and just sharing too many good times to recount.  His love and caring for all of them, and everyone in his life, was boundless; and he was loved so much by all in return.

Jim was an honorably discharged Army veteran, having been a Paratrooper in the 101st and 11th Airborne Divisions in Japan during post-World War II and in the Korean War.  He was known to have “jumped” for fellow paratroopers who had lost their nerve.  Jim married the first love of his life, Alice Spriggs Rouse, and raised four children with her:  Lawrence Rouse (Carolyn), of Las Vegas, NV, Robin Rouse Olson (Gordon), of Billings, MT, Stephen Rouse (Annette), of Charlotte, NC, and Daniel Rouse (Lisa), of Bismarck, ND.  Jim and Alice had many travels and experiences together until she died far too young of cancer in 1990.  Through the Bismarck Beginning Experience program, he met the second love of his life, Eileen Mack Rouse, married her in 1993, and had many more years of happiness as they settled into retirement in North Dakota and traveled the world.  Jim was a lifelong Catholic, regularly involved in services and activities through the Cathedral of the Holy Spirit Church.  He was a former Grand Knight in the Knights of Columbus, a member of the Serra Club, Bismarck/Mandan Elks, North Dakota Historical Society, the VFW, American Legion, and he was honored for his civic involvement by being commissioned a “Kentucky Colonel.”

For many years, Jim owned a 1929 Model A Ford, and he was frequently seen driving it around Bismarck, such as on Sunday summer evenings when he and Eileen would drive down to the Dairy Queen for an ice cream cone.  Jim was an avid scholar of history, both reading about and visiting historic sites across the world.  Jim gave voice to many audiobooks as a volunteer reader at the North Dakota State Library, volunteering over 2500 hours, where his work will benefit visually impaired persons into posterity.

Jim was always there for his family, be it throwing a football, teaching them to ride a bicycle, participating in many Boy and Girl Scout projects and activities, attending his kids’ and grandkids’ ball games, concerts, and school events, encouraging them all to keep going when they had tough times.  When his job took him out of town, Jim would still talk individually with his children by phone, making sure they knew he was interested in their lives.  At the end of a week of long days while at U of Pittsburgh night school, Jim remembered to stop every Friday evening to bring home Klondike ice cream bars for the family.  He took the family on many car trips, exploring the different areas of the country where he and his family lived, as well as cross-country and international adventures that broadened our horizons and informed us of the wider world out there.

When Jim was growing up, money was tight.  Through intelligence, hard work, and determination, he made his way to distinction in his profession, but Jim’s first love was always his family.  As a youth, Jim overcame other obstacles, such as his former fear of water, so much so that he became a dedicated swimmer for the rest of his life.

Jim was preceded in death by his parents, James, Sr., and Mary Rouse, his first wife Alice, his sisters, Marlene Rouse, Lorraine MacTaggart, and Martha Rice, and granddaughter, Kathyrn Dempsey.  He is survived by his wife Eileen, his children, and two beloved stepsons, Kerry Mack (Ellie), of Arlington, VA, and Kyle Mack (Sandra), of Fargo, ND.  He is also survived by five grandchildren, four step-grandchildren, and several great-grand-children.

We are sure Jim is driving around Heaven in his Model A waving at everyone and honking that distinctive horn, with a smile on his face.  We thank God for bringing Jim into our lives. The world is a better place for Jim having walked a measure of this life journey with us.

In lieu of flowers, the family requests that memorials be sent to the Annunciation Monastery or the God’s Child Project.

“Having worked with Jim for many years at North American Coal, he was a very kind, compassionate friend as well as co-worker.  I mourned with him at the death of Alice, and rejoiced with him when he married Eileen.  He will be missed by so many.  My deepest sympathies to Eileen and all of Jim’s family.”  Dorothy L. Falconer