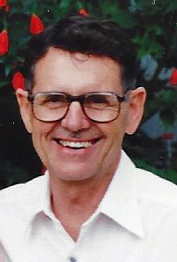 On June 12, 1949 he married Dorothy Rigsby in Cicero, Indiana.  They made their home in Bemidji, Minnesota where their two children, Mike and Sheryl were born.

They resided in Minnesota for 35 years, where Fred logged for several years and then became a migratory beekeeper. The beekeeping business led them to move to North Dakota for the summers and Brooksville, Florida for the winters.  They continued the seasonal moves with the bees until retiring from beekeeping in 1996.

After retirement, Fred and Dorothy settled in Brooksville, Florida where Fred maintained a large persimmon orchard on their property.  Fred was kept busy working in the orchard with grafting trees and maintaining the irrigation system.

Fred’s hobbies included being an avid rock hound and collecting diamond willow to carve into canes and walking sticks.  These hobbies took them on many road trips around the country, including five trips to his favorite destination of Alaska.

Fred’s faith in God was very important to him. This led him to be active in the church, where he held a number of leadership positions over the years.

A family memorial service and interment was conducted by Pastor Harold Chin at the family farm in rural New Salem, ND.

Fred was a great guy who I got to know many years ago. He will be greatly missed. I extend sincere sympathy to Dorothy and Fred’s family. Bryan Giese