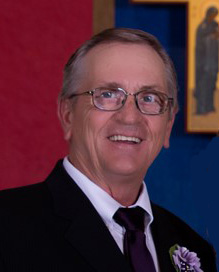 Posted at 19:56h in Uncategorized by kkbold 0 Comments
Share:

Duane J Welk, 64 Bismarck, went to the Lord Sunday morning April 28, 2019 after a short battle with brain cancer surrounded by his loving family. A Celebration of life services will be held at Prairie Heights, 4403 Centurion Dr. Bismarck, ND Saturday May 4, at 11:00 a.m.

Visitation will be held May 3 at Bismarck Funeral Home from 6-7 with rosary at 7 p.m.

Duane was born in Linton, ND on November 11, 1954 to Eugene and Eugenia Welk. He was raised on the family farm until age 18.  He attended Odessa Grade School through 8th grade and graduated from Emmons Central High in 1972. He was also all conference football player.  After graduating he enjoyed going custom combining for the summer then attended and graduated from Wahpeton State College.

After college he married the love of his life, Cindy Feist in 1978, at Hague ND. Duane worked in car sales for 37 years, at Ned Nastroms, Stan Pucklich, Wilhelm and Ressler Chevrolet. Duane enjoyed meeting all kinds of customers and remembered every sale he made. During his retirement he enjoyed working for Menards.

The joy in his life was being with his children and especially his grandchildren, enjoying every moment he could with them. Duane also was an avid sports watcher, especially his favorite teams, Minnesota Twins and New England Patriots. We will miss him yelling at the tv during the games.

He was preceded in death by his father, Eugene Welk; his brother, Timothy Welk; and sister, Carleen Welk; as well as his in-laws Adam & Kathrine Feist.