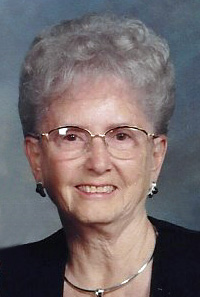 Visitation will be Tuesday evening, at the Bismarck Funeral Home, from 5:00-7:00 p.m., with Rosary and Vigil beginning at 7:00.

Cecelia was born on March 25, 1930 in Mandan, ND, the daughter of Luigi and Rose (Swindling) Ciavarella.  She was raised and educated in Mandan, receiving her diploma from Mandan High School.

On October 17, 1950 she married the love of her life, Herman Dosch in Mandan.  Cecelia met Herman at Capital Laundry Company in March 1949, where they both worked.  They dated 1 ½ years before they got married and the rest is history.  They were blessed with 5 children.  They would have been married 70 years this October.

She enjoyed camping, fishing, playing pinochle, dancing and gatherings with family & friends.  Cecelia and Herman entered many waltz & polka contests and have many 1st place trophies to prove it.  They did a lot of traveling until they found their winter home in Mission, TX.  They wintered at Mission Bell Resort and then later moved to Fiesta Village until selling their place in 2017 due to her health.  At family gatherings she would always make by request her famous homemade rigatonis and meatballs.

She is also survived by her brother, Joseph Ciaveralla.